I have a DSL connection so thought I’d sneak another post in about our looong drive East. Actually it was a bit shorter than usual as instead of driving to Cambridge we went first to Oyster Bay on Long Island, so it was more like 13 hours as opposed to the 16 or 17 to Boston.

We pulled off the highway in Washington PA, which turned out to be the college town of Washington and Jefferson — Sarah did some excellent chowhounding and sniffed out a surprisingly excellent casual-Italian dinner at an inauspicious-looking downtown grill. Then back on the road until Bedford PA where we avoided the cluster of chain hotels and found a cute little place called Judy’s Motel. I believe this was our actual room, Guest Room #2: 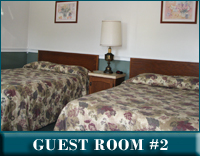 The girls were so excited about being at a hotel and sleeping in the same room with us that they were up until about 10:30. Judy’s (btw “Judy” was a middle-aged man in shorts; I have the sense that Judy lived in the motel’s early days in the 1950s, a couple generations of owners ago) had wireless so we sat on the little bench in front of our room and researched local food and tourism. Sarah discovered Bedford’s Coffee Pot House, which we visited the next morning after breakfast:

We actually have some good shots of us in front of it, but we don’t have our technology in order right now. The only disappointment was that one cannot actually enter the pot.

The girls are pretty good travelers. They tend to settle into the drive and entertain themselves, to some degree. There was one odd moment where they decided they wanted us to stop talking — “don’t say ANYTHING!” — and preferably stop moving as well; Sarah had to insist that in order to drive she needed to move her arms.

The (grand)parents were in town and had arranged a road trip to New Harmony, site of the failed socialist/utopian community founded by Robert Owen in the 1820s. I’d always heard this was worth seeing, but the recommendations tended to sound a bit restrained, enough so here it is 7 years after we moved to Indiana and we hadn’t gone yet. We had a great time, though. The weather was gorgeous, which helped, and the sights were more plentiful and interesting than I’d anticipated. Lots of fun to wander around the historic/reconstructed section of town, a little bit of a Colonial Williamsburg sort of thing.

Highlights of the trip included:

-Golf carts. Though not part of the original Owen community, nor the preceding German Lutheran one of 1814-1820s, golf carts play a crucial role in today’s New Harmony. Vera was somewhat obsessed about them and insisted we go at 8 a.m. or so on Sunday to claim one at the Inn. We made fun of her, but we had to admit that it was great fun to zoom around town. By some oversight we don’t have a photo of us on our cart.

-Labyrinths. There are two, a three-dimensional one of bushes and shrubs — this in an early 20th-century re-do of a creation of the Lutherans — and a two-dimensional one of stone in a beautiful little garden. See above for a shot of the ladies working on this one (they gave up after about 5 mins, Sarah said she got dizzy.) Sarah returned on Friday night to see the monthly candle-lit Moonlight Labyrinth walk which sounded slightly witchy.

-The dog and cat at our B&B. See my previous post about the Grimm House B&B. The girls fell in love with the sweet dog Henry and the cat. They also really hit it off with Grafton, the 7 year-old boy.

-Some neat modern architecture: the Philip Johnson Roofless Church, and the Richard Meier visitors’ center; this latter is a late-1970s structure that sticks out of the landscape like a gleaming postmodern ship — doesn’t exactly blend in, but I liked it. We watched a little introductory/historical movie about the town here, which was extremely silly and full of bad reenactments and unconvincing beards. Iris found a snakeskin just outside the center.