Here’s the new kitty (the one Sarah brought home in the middle of Obama’s speech)! 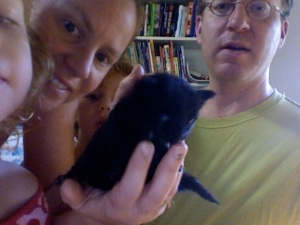 Sarah was visiting her friend Julie; Julie’s daughter Haley had brought this little guy home the day before — I think a teacher at Haley’s school had found an abandoned litter.  We have not yet formally committed to keeping him permanently and as far as Celie and Iris understand, it’s a foster care situation.  Julie and Haley were calling him “Dito” which I don’t think we’re going to retain.  The girls seems to want to call him something like Blackie, but we’re trying to steer them gently away from that.  (Oy, just thought about the Obama speech context — OK, any “Blackie”-type name is definitely off limits.  Maybe Hope or Change?)

So far he’s mostly all about trying to learn how to drink from the little bottle, at which he scrabbles fiercely.  He’s just beginning to learn how to crawl a bit.  Right now he’s kind of pouncing on and attacking a tiny stuffed bear, which is a big breakthrough.

I’m concerned that he’ll turn out to have some sort of feral-kitty trauma, but we’ll see, and he’s pretty cute.