Sarah is working on a major project — rebuilding the wall adjoining our front driveway. It looked very picturesque, covered with ivy, but sagging & bulging all over.  When we pulled the ivy off we realized that it was in mid-collapse.  This is a classic D.I.Y./ My Wife Does it Herself project in that I have had very little to do with it.  Depending on her mood, Sarah is resigned or mildly irritated about this.  I did carry some heavy stones on several occasions, I’ll say in my defense.

Sarah did a lot of research on the mechanics and hydraulics, etc., of supporting walls in preparation, but she is not truly doing it herself — she now has Jack and his assistant Hunter on the project, but she has so far worked side by side with them the entire time.  They spent all day Wednesday on it and one other afternoon.  Sarah pressed them to set a dollar amount on the value of her labor.  “Admit it, would I be the $10 per hour guy?” she asked and they assured her, “no, no, you’d be the $12/hour guy.”  She felt OK about that — still on the bottom of the pay scale, but respectable.

The one thing Sarah is regretting so far is that she realized too late that they had probably already destroyed the chipmunk home.  We have this chipmunk Chippy who is hanging out in the driveway 75% of the time and had some kind of lair in the rock wall which has now obviously been obliterated.  But we are hoping that he’ll have time this Fall to figure out some new arrangement. 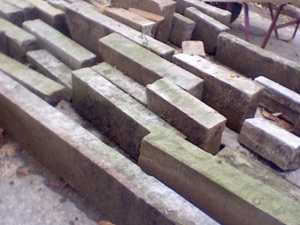 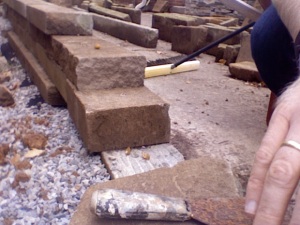 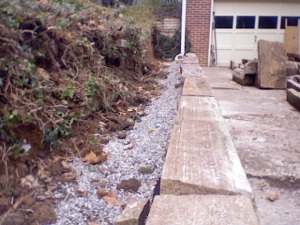