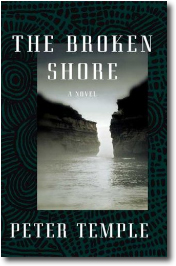 Am almost done with this Australian mystery novel, The Broken Shore by Peter Temple.  It’s very good although to tell the truth, I’ve sometimes had trouble following the plot because of the Australian slang/jargon.  There’s a whole Glossary at the end which is helpful.  Here are some good items:

Quickpick: A lottery ticket that spares the buyer the task of choosing numbers by randomly allocating them.  Anything chosen without much thought or care.  Also a term for someone, not necessarily a prostitute, picked up for sex.

Pommy:  Someone from England.  The English are often known as Pommy bastards.  This has been known to be said affectionately.  The term derives from “pomegranate” as rhyming slang for “immigrant.”

Bludger: Once, a man living off a prostitute’s earnings; now applied to anyone who shirks work, duty or obligation.  A dole bludger is someone who would rather live on unemployment benefits than take a job.

I tried out one of the book’s pieces of slang, not one of the ones about prostitutes, on our Australian friend Catherine, and she immediately recognized it: spaggy bol, “Spaghetti bolognese.  Also called spag bol.  Italian immigrants to Australia were once called spags.“