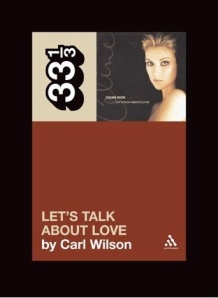 I read this a while ago but forgot to blog about it.  Strongly recommend this instant classic, one of the smartest books on modern pop music I know.  (What else would I include in that list?  Books like Michael Azerrad’s Our Band Could be Your Life, Fred Goodman’s The Mansion on the Hill, Robert Christgau’s review collections, Jon Savage’s England’s Dreaming, Greil Marcus’s Lipstick Traces, Jeff Chang’s Can’t Stop Won’t Stop, Rob Sheffield’s Love is a Mix Tape, Bob Dylan’s Chronicles Vol. 1…probably forgetting a lot…)  Wilson’s book is part of the 33 1/3 series of books published by Continuum each dedicated to one pop album, in this case, Céline Dion’s 1997 Let’s Talk about Love. The series was a great idea for many reasons, among them the fact that the books are small & cute with an attractive uniform design — they in fact look kind of like miniature LPs on the shelf.  61 books have been published in the series so far, but Wilson’s is sui generis among them (as suggested by the fact that his is the only one granted a subtitle to date — oops, just noticed the U2 book has one too).

You certainly don’t need to care about Céline Dion to enjoy the book.  Or be Canadian, although the Toronto-raised Wilson is fascinating on Dion’s roots in French-Canadian Quebecois chanson/showbiz traditions.  Wilson takes Dion, one of the top-selling pop singers of our era, now in possession of her own schmaltzy Vegas show, as a test case for the practices, politics, and poetics of taste in popular music & culture.  For Wilson, Dion’s records somewhat resemble Russian conceptual artists Komar and Melamid’s “Peoples’ Choice” Most Wanted Paintings.  Crafted according to the specifications of a poll, the paintings contain landscapes, water, the color blue, soft curves, and representational images of people and wild animals, etc.  Dion’s music is arguably the Peoples’ Choice of pop, a statistically irrefutable embodiment of broad popular taste.  So is it awful or great?

Wilson, a right-thinking hipster with “good taste,” had always hated Dion’s music, but had become suspicious of his own aversion; the book is his exploration of what it means to hate or to love Céline Dion, or any kind of music — with particular attention to subcultures, embarrassment, sentimentality, class, canons, kitsch, and shame.  Wilson lays out the ideas of Pierre Bourdieu on taste and distinction in several lucid pages (the book would work fabulously in an undergrad course on cultural theory), and he’s well-informed in theories of aesthetics generally, but he’s a working pop music journalist with a snappy, funny style, and the book is a completely fun and brilliant read.

He’s especially insightful on the meanings of “sentimentality” in today’s pop culture:

Punk, metal, even social-justice rock such as U2 or Rage Against the Machine, with their emphatic slogans of individuality and independence, are as much “inspirational” or “motivational” music as Céline’s, but for different subcultural groups.  They are just as one-sided and unsubtle.  Morally you could fairly ask what is more laudable about excess in the name of rage and resentment than immoderation in thrall to love and connection.  The likely answer would be that Céline is conformist, quiescent, unsubversive.  “Subversion” today is sentimentality’s inverse: it is nearly always a term of approval.

Here’s a collection of press, reviews, interviews of/on the book.  New York Magazine named it one of the ten best books of the year, quite a feat for a little paperback that costs $8.76 on Amazon. Here’s Alex Ross on the book.

7 thoughts on “Carl Wilson’s Let’s Talk About Love: A Journey to the End of Taste”