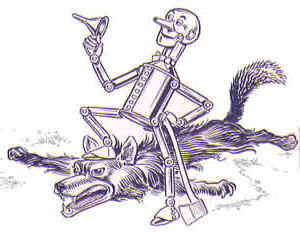 Just had to write again about the amazing emphasis on animal slaughter in The Wizard of Oz.  It’s practically like Tintin in the Congo (in which the jungle animal body count increases steadily throughout).

Here are a few scenes from the climactic Chapter 12, “The Search for the Wicked Witch,” as she sends out waves of her minion creatures to attack Dorothy & co.

He seized his axe, which he had made very sharp, and as the leader of the wolves came on the Tin Woodman swung his arm and chopped the wolf’s head from its body, so that it immediately died. As soon as he could raise his axe another wolf came up, and he also fell under the sharp edge of the Tin Woodman’s weapon. There were forty wolves, and forty times a wolf was killed, so that at last they all lay dead in a heap before the Woodman.

Then he put down his axe and sat beside the Scarecrow, who said, “It was a good fight, friend.”

Now crows, giving the Scarecrow a chance to show his stuff:

And how about some insects?

The bees came and found no one but the Woodman to sting, so they flew at him and broke off all their stings against the tin, without hurting the Woodman at all. And as bees cannot live when their stings are broken that was the end of the black bees, and they lay scattered thick about the Woodman, like little heaps of fine coal.

Finally, the Witch sends off a herd of buffalo, which Dorothy herself dispatches, shooting each one through the eye with a long-barreled rifle.  (Just kidding.)

It all has a distinct Manifest Destiny, conquest-of-the-Western-wilderness feel to it.

2 thoughts on “More Animal Slaughter in the Wizard of Oz”