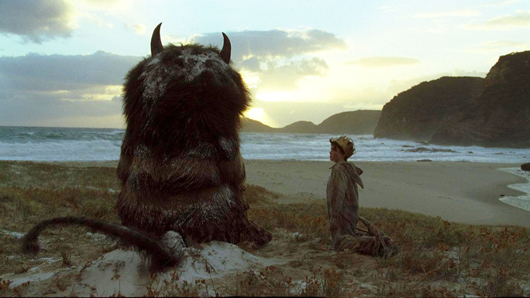 Spike Jonze’s Where the Wild Things Are is kind of like a long, whacked-out family therapy session.  Maurice Sendak has commented that the monsters in the book are all based on his Polish-Jewish aunts and uncles back in 1930s Brooklyn.  Homage seems to be paid in the Wild Things’ names in the movie: Judith, Ira, Carol — they sound like they could be those aunts and uncles.  (It’s funny that the most Jewish-seeming one, Ira, is voiced by Forrest Whittaker.)  But I wouldn’t be surprised (just guessing here) if Jonze based a lot of the movie on memories of his own parents’ divorce and family-therapy sessions.  Many of the antics on the island feel like different forms of play-acting and role-playing in that context as Max works out his rage against his mother, his fears and anxieties, loneliness, with these other equally-troubled characters.

One memorable scene occurs when Max is on the run from Carol, the Tony Soprano-voiced character who seems an avatar of Max himself in his uncontrolled rages.  Carol feels betrayed by the revelation that Max may not in fact be “the king” (i.e. the good parent, the one who makes everything OK — could be the absent father, but the mother is much more important in the movie and book).  Max encounters K.W. (whom Carol loves and feels rejected by), who seems to be the sister-figure monster.   She urgently instructs Max to hide from Carol in her mouth.  He hesitates at first and then, as Carol approaches, down the hatch: he slides into her mouth and into her gullet (where he finds a raccoon foraging).   Once Carol leaves, he climbs back out in a slimy birth scene.  Pretty amazing!

Sarah commented that the movie has a lot of John Cassavetes in it and that it can be a bit hard to take in the painfully intimate and claustrophobic, dysfunctional behaviors of the monsters.  “K.W. may be psychotic, with her owls” (that she believes to be great sages), Sarah observed, Carol flies into dangerous bipolar rages, Judith is, as everyone comments, an endless “downer,” manipulative and passive-aggressive, Douglas (the goat one) is very depressed and self-undermining.  Also (still channeling Sarah here) you have to have a pretty high tolerance for wet plush animal fur, which is the defining and sometimes oppressive texture of the movie.

It has occasionally arch/cute moments in that Dave Eggers way, too, but I thought it was pretty great overall.  Great on childhood creativity and imagination — loved Carol’s elaborate sculptural mountain world into which, if you place your head in just the right spot, a fully-developed three-dimensional scene with moving figures on a river surrounds you. This struck me as one of those manifestations you sometimes see in Jonze’s movies (Michel Gondry too; and maybe Wes Anderson?) of a desire for film to be a handmade craft/art project, something tactile and a bit like a child’s fantasy world.

I’m glad the movie has done well, as it would be nice to see more 100 million dollar movies like this one.

p.s.  If we’d tried to bring C&I to this one, we would’ve been out of the theater in 15 minutes.  It’s quite scary, I wouldn’t bring any kid younger than maybe 8.

1 thought on “Where the Wild Things Are as family therapy”