Tuesday.  Girls come home all excited about a visit to their school from Sasha, a player on the IU women’s basketball team.  Aka “Big Sash.”  There was a special promotion going on in which each kid was sent home with an adult ticket for the game on Thursday night (kids are free anyway I think).  Mom was going to be busy at the studio helping set up the holiday show, but I agreed to take them. 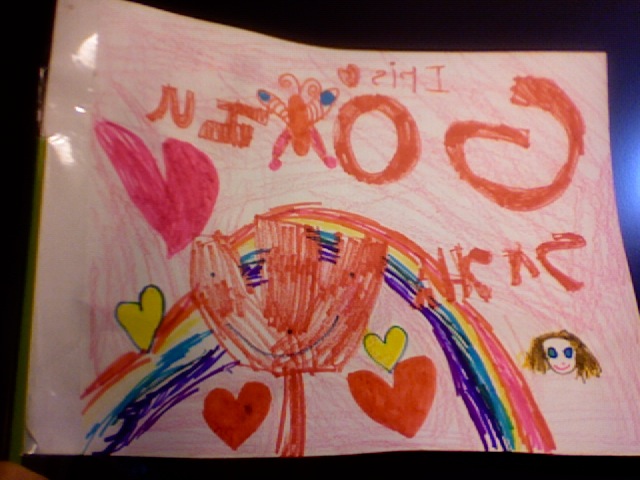 I guess that’s Big Sash at the bottom right.  The rainbows, hearts and butterfly really push the go-team spirit to the next level, I think.

6:30.  In the parking lot, we see Calley and her dad and Olivia and her mom.  Joyful, hopping-up-and-down excited group hugs.  It has been a whole three hours since the kids have seen one another.

6:35.  In the arena!  Game has started, you can see all the kids from school at one end with their red t-shirts on!  Big Sash is on the court!

6:40.  For the next 2 hours it’s like some hopped-up 5-8 year-old cocktail party with continual changing of seats, conferrals about snacks, walking up and down the stadium stairs, new groupings of kids, weird games involving cheers, waving signs and a pom-pom someone brought.  The parents exchange occasional amused chit-chat over the din and try to prevent things from getting too inappropriate or dangerous.  The kids pay only fleeting attention to the actual game.

For much of the game we’re down in the 3rd row or so with the cheerleaders right in front of us.  The role of cheerleader normally seems so gendered, a performance of exaggerated femininity in structural, Manichean opposition to the exaggerated masculinity of the male jocks on the court.  But here it’s two very different models of female identity, bodies, behavior, gesture, etc., which seems to destabilize or call into question the original opposition.  (For ex. the center on Florida State must be 6’5″ and built to bust through any pick.)  I was rooting for C&I to be more impressed by the players.

7:30 At halftime all kids are invited to come on court and form two masses through which the players run through, high-fiving (if you can call it that at 3 1/2 feet from the ground).  Pandemonium as 100-odd 5-8 year-olds rush the court.  It’s a slightly dangerous situation when they all return in a thundering herd, rushing right through the IU team’s layup drills.

7:45 Iris finally makes it onto the Jumbotron!  C&I and their friends end up getting filmed a couple times doing their little cheers and dances.

8:00  Celie cajoles one of the cheerleaders to throw her a t-shirt!  Size extra-large men’s.

8:30  It’s a close game for much of it, but finally ends with Florida State winning by 8.  (One silver lining: Big Sash got a double-double with ten rebounds.)  I drag the girls out.  They have a despondent manner which initially I think is just fatigue, but then they start saying: “I can’t believe IU lost!”  Sobbing, a little bit.

“Why did they have to lose?”

I offer various sententious commentary about the nature of sports, winning and losing, etc.  They basically ignore me.

“I feel so bad for Sasha, I really wanted her to win!”

And, poignantly: “It’s OUR FAULT!  We were playing with Faith and Gabe and we didn’t cheer hard enough!”  When I try to deny this: “No, daddy!  Cheering really helps you play better!”  It’s pathetic, but I also have to stifle a chuckle from the front seat.

This continues until they’re in bed.  They seemed truly astonished and appalled that IU, notwithstanding the whole crowd rooting for them, had lost.

The sting of defeat seemed to have faded a bit by the next morning.  But I’m still not sure they possess the emotional armor to handle team spectator sports.