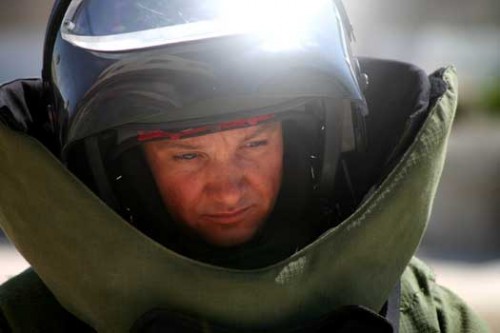 We watched the DVD of the Hurt Locker last night and I think it gave me nightmares. Or at least, I found myself awake at 5:30 a.m. and had some images from it running through my head, especially the moment when the well-meaning army doctor gets exploded to bits.  I could easily see myself as that guy.

Last week I guess it was a bit of a surprise when Kathryn Bigelow’s The Hurt Locker beat out her ex-husband James Cameron’s Avatar for best picture award from the Directors Guild of America.  Perhaps many others have made this point, but I noticed some strong similarities between the two movies.  Both feature a bad-ass working-class white guy protagonist, who in a wartime situation is the one chosen to enter into enemy territory on a kind of reconnaissance mission — Avatar‘s Jake Sully to ‘go native’ among the Na’vi on the planet Pandora in order to figure out how to persuade them to relocate, The Hurt Locker‘s William James to go into Baghdad’s most dangerous neighborhoods to defuse Improvised Explosive Devices.

One major difference could be summed up as the two movies’ implicit attitude towards the mediation of warfare.  In  Avatar, the mission is entirely technologically mediated: paraplegic Jake Sully enters his avatar suit, takes control of a 9-foot tall native body, and virtually enters an alien world.  I thought Caleb Crain’s critique was pretty accurate, although it didn’t bother me as much as it did him:

The audacity of Cameron’s movie is to make believe that the artificial world of computer-generated graphics offers a truer realm of nature than our own. The compromised, damaged world we live in—the one with wars, wounds, and price-benefit calculations—can and should be abandoned.

That is, the movie completely endorses the ‘avatar’ effect of abandoning one’s reality for a mediation. As Crain points out, the movie tempts you with the promise, which is partially enacted by the experience of watching the movie itself, of giving up on our damaged world and succumbing entirely to the virtual, imaginary, still-pure fantasy of Pandora.

What struck me about The Hurt Locker is that it can be read as an overt critique of just this kind of embrace of the mediation and virtualization of warfare (and perhaps of experience more generally).  When James shows up as the new head of the bomb dispersal team, we’ve already seen the team in action with their previous leader, who was killed in an operation gone wrong.  As part of what appears to have been standard procedure, they first approached a potential bomb via a little robot on wheels; some of the first images of the film are in fact broadcast from the camera of that robot, zooming along the Baghdad street like a strange little child’s toy.  The robot approaches the bomb, checks it out, and does much of the work of defusing it before the human being has to take over at the end.

The bomb disposal team could thus be seen as part of the logic of the U.S.’s deployment of Predator drones to commit targeted assassinations, as elements of a form of warfare that is systematically mediated in order to ensure that as many of the most dangerous and vulnerable actions as possible are performed virtually, without putting U.S. soldiers in harm’s way. Bigelow implies that the entire war strategy is continuous with the X-Box video games she shows the soldiers playing at one point. Not that the soldiers aren’t in fact in continual grave danger, but that the logic of the war is to employ virtual strategies whenever feasible.  By beginning the movie from the bomb-robot P.O.V., Bigelow even links our own experience of the film with this kind of mediation: we, like the soldiers, are watching the robot’s film as it (not we) approach the bomb.

When Jeremy Renner’s William James joins the squad, his disconcerting innovation is to do away almost entirely with the layers of mediation separating him from the bomb.  He ditches the robot, takes his helmet and even suit off whenever possible, and just heads straight to the bomb, where he sets to dismantling it with his pliers like some garage hobbyist tinkering with a faulty motor.  It’s virtually suicidal — “you know what they call them, suicide bombers,” he comments at one point, underlining his own tendency to mimic and put himself literally in the same space as the Iraqi insurgency.  What it is to be “suicidal” is to shed the virtual armor and to put your own body at risk.

The movie makes clear that James’ approach is both heroic and completely self-destructive, and compromised by an obviously compulsive search for an adrenaline rush.  But Bigelow also depicts James, with ambivalent admiration, as offering a wholescale rejection of the U.S. army’s mediation of combat.  He’s the precise opposite of Avatar’s Jake Sully, who becomes a hero precisely by embracing his own virtualization.

Whether this has anything at all to do with Bigelow’s divorce from Cameron, I have no idea!  But the (relatively) low-budget Hurt Locker can definitely be read as an implicit rebuke to Cameron’s mega-budget fantasia.  (Which, by the way, I did also enjoy; even if it’s ideologically creepy, it is an amazing spectacle).

3 thoughts on “Avatar vs the Hurt Locker”