Damn it, I just wasted too much time trying to create a Venn diagram for this post.  Easy to make one but I couldn’t embed it; I give up.  The failed diagram was my attempt at a graphic representation of my unusually active Friday night, when Sarah and I and our friend Leah went to see Scott Pilgrim vs. the World and then I peeled off from the tired ladies to see Junior Brown performing downtown. 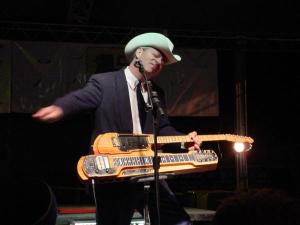 The Venn diagram represented the small overlap between the youthful “Emerging Adults” at Scott Pilgrim (one circle) and the mostly 50/60-ish Hoosier country music fans of Junior Brown (second circle).  The little sliver of overlap between the two circles may only have been only me on this particularly evening: 40ish aging hipsters/ incipient geezers.

If you don’t know, Scott Pilgrim is the film version of a graphic novel series depicting the adventures of young Toronto indie-rock 20-somethings in pseudo-Manga (e.g. Japanese comic) style.  I got the first book or two several years ago and didn’t keep buying it the series, but it’s very witty and fun.  The charm is partly in the casual way the inbred, gossipy, wise-cracking, media-saturated world of these arty hipsters blends into video-game and sci-fi tropes and events (Scott for some reason must battle to the death the seven evil exes of his new girlfriend Ramona).   Probably inevitably, the movie somewhat pumps up the Mortal Combat-esque battle scenes which end up taking over the movie a bit too much.  But it’s all very funny and well done.  One highlight was Scott’s battle with Romana’s ex who possesses the unstoppable force of Vegan power: “we’re just better than non-vegans,” he observes (or some such).  He cannot be defeated, it would seem, until Scott tricks him into accidentally drinking some coffee with half-and-half in it, at which the Vegan Police show up and haul him away.  Michael Cera was not exactly how I imagined Scott, but he was good in his own wimpy way.

From a head-spinningly different universe is Western Swing legend Junior Brown, is actually an Indiana native (which I’d never known) who’s been an Austin fixture for years.  When we visited George in Austin in 1996 or something he took us to see Brown at his then-weekly (I think) show at some cool outdoor restaurant venue.  On Friday night he came out a bit late — someone I ran into there told me this is generally the case b/c Brown is busy smoking his famously excellent pre-show weed backstage.  He is perhaps best known for having invented what he calls his guit-steel, a two-necked guitar.  He’s a virtuoso and many of the songs — mostly country/ Western Swing, with some surf and Hawaiian steel excursions — are designed to allow him to show off his impressive skills.

Although it was a challenge to find any common ground between the world of Scott Pilgrim and Junior Brown, my ever-busy relations-seeking mind led me to imagine JB battling the Katayanagi Brothers (a Japanese synth rock duo) in one of the battles-of-the-bands from the movie.  He’s definitely stand a decent chance, especially with the power of the guit-steel’s double neck, one available to vie with each evil brother.