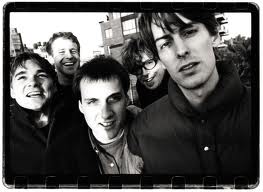 Reports from the Pavement reunion tour have been sending me down memory lane.   I must obnoxiously boast that I think I saw one of Pavement’s first few shows ever.  Or at least outside of Stockton?   This must have been the summer of 1989 when I was back in Cambridge after my junior year of college.

[OMG, this was 21 years ago!!!!  How can that be??  21 years prior to 1989 was 1968!!  Does that mean I’m like an oldster talking about seeing Moby Grape at the Fillmore?? And if Malkmus is in his 40s like me how come he has that full head of hair?  Can an artist entering middle age really effectively communicate the melancholy nuances of adult life without having experienced male pattern baldness?]

Sorry.  Pavement’s first e.p., Slay Tracks (1933-1969), had just come out and it was being played to death at WHRB, Harvard’s radio station where I did a summer fill-in show (not sure if it was that summer) and had various friends who DJ’d. I loved that record (and the other ones that soon followed).  To me they felt like this perfect, out-of-nowhere combination of Sonic Youth noise, Swell Maps/the Fall grime/static, and New Zealand/Flying Nun pop tuneage.   They played in the smaller back room of the Middle East in Central Square.  I remember being amazed that they were, minus the hippie freak drummer Gary Young, these wholesome, good-looking college boys.  Slay Tracks was all mystification and unexplained references — the title reminded me of the Swell Maps in its inexplicable 20th-century history timeline — and I certainly didn’t expect guys who looked like they could’ve been on the U VA soccer team or something.  (Well, fencing maybe.)

They were definitely the Vampire Weekend of their day in that respect.  College-boy sex appeal.

I saw them again around when Slanted and Enchanted came out in 1992 — I was living in NYC and saw them somewhere downtown.  Malkmus was outside and I kind of screwed up my courage and went up to say hi and that I loved the album or some such.  I awkwardly introduced myself by asking “S.M.?” and he seemed embarrassed and corrected me kindly, “Stephen.”  At that point they still identified themselves by their aliases S.M., Spiral Stairs, et al — part of the veils and obscurings of identity and meaning that were at that point beginning to lift as they became really big.

I wrote a while ago about Big Star as an example of “mystery and the mysterious” in pop music in the pre-internet age.  Before Google & Pitchfork, etc, this was such a major part of what it meant to learn about bands: information scarcity.  I actually remember getting hold of some kind of xeroxed Velvet Underground fanzine when I first got into them in 1983 or so.  With an obscure band like Big Star, there were only a few places to go for information, and a lot remained unexplained.  A band like Pavement played with this and turned it into a strip-tease.  The early records were red-herring-filled and explained almost nothing.  Maybe you’d start to get third-hand stories and reports via fanzines or elsewhere, but the particular brand of celebrity was all about a paucity of information and the imaginative investments and projections that would foster.

By the time I introduced myself to “S.M.,” Pavement was starting to give up on that whole project.  Crooked Rain really inaugurated Pavement 2.0, the college-radio favorites with the handsome, patrician lead singer whom Courtney Love dubbed the Grace Kelly of indie rock.  Pavement 2.0 had funny, witty songs that communicated well on the radio and they functioned very well in the post-grunge alterna-media environment.  Even their gestures of negation — “Smashing Pumpkins, they ain’t got no function” — were also effective moves in that game.

I know this is boringly anti-populist, but I never loved Pavement 2.0 the way I did the Pavement of 1989-1994.  Of course I do love Crooked Rain and a lot of the later stuff, but the “Range Life” Pavement, the Pavement exploring the possibilities of becoming a California pop band, bathed in sunlight, to me always lacked some of the noir shadows and epistemological sinkholes and ambiguities of the early art-punk version.   I’d take Slanted and Enchanted over Crooked Rain any day, “Loretta’s Scars” and “Perfume-V” over “Cut Your Hair” and “Range Life” in a second.

The early releases reminded me of Flying Nun records in the way they functioned as talismans, fetishes, sacral objects with a numinousness created by a dearth of reference.  “Pastor’s flock, no church” (“Perfume-V”): “Song is sacred” as Malkmus put it in “Shoot in the Singer.”  The project was to generate sacral value out of limited networks of small-circulation records, intensely original aesthetics, passionately minor fan communities, and shrouded identities. I don’t blame them in the least for becoming Pavement 2.0 — the “early” approach was no longer available; it was a smart and effective move to go the direction they did, I personally just didn’t connect quite as strongly any more, though I still always liked the music a lot and thought Malkmus was a damn fine indie Grace Kelly.*

*I realize I am not accounting for the late psychedelic turn, e.g. Terror Twilight, which was perhaps an effort to restore some version of the old mystery/distancing tactics in a new form, although I’d have to go back to that album again.

Anyone have an extra ticket to the reunion tour?

5 thoughts on ““You Can Never Quarantine the Past:” Pavement Redux”