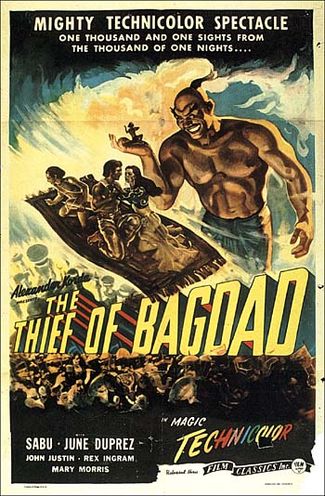 Conrad Veidt is the evil (and scary) Gran Vizier Jaffar; Teenage Indian actor “Sabu” as the lovable thief Abu.  It reminded me of The Wizard of Oz in certain ways (the music, the cheesy yet magical special effects, the all-out fantasy unconstrained by naturalism).  When Abu goes to capture the All-Seeing-Eye jewel from the head of the statue in the temple on the highest mountain in the world, it feels very much like Dorothy and the gang’s infiltration of the castle of the Wicked Witch of the West — and in fact the guards seemed like they could have been re-using the Flying Monkey uniforms.

Race, ethnicity and accents are all quite confusing.  The princess, originally supposed to be Vivian Leigh but played by the English June Duprez, has a father (the Sultan) who’s almost Dickensian.  Why are they British?  This seems pretty typical of movies of this era, though.

When Abu is flying, holding onto the ponytail of the Djinn of the lamp, Iris remarked that you could see the string holding them up.  This didn’t seem to bother her at all.  The Sultan flying above the city on the magic horse was really kind of… magical.  You can feel the excitement of these early special-effects experimenters figuring out how to do these tricks for the first time.  The flying horse, the scary murderous statue, the All-Seeing-Eye, the flying carpet — all seem linked to movie-making as arts and gadgets of spectacle and illusion.  The foolish Sultan prides himself on possessing the world’s greatest collection of toys, and he trades his daughter away for the flying horse — he seems like a Hollywood mogul.

Looking at some online reviews, I think it was a mistake for us to see it as a Netflix on-demand movie; everyone raves about the spectacular beauty of the technicolor, and I don’t think this came through fully.  I’ll see it again on DVD at some point.

3 thoughts on “Family Movie Night: “The Thief of Bagdad””