I finally got around to reading this, my copy of which (not this edition!) I think I picked up at the last-day MLA book exhibit firesale a year or two ago. 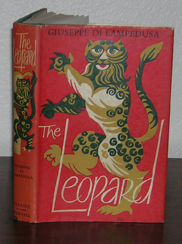 The Leopard‘s author Giueseppe di Lampedusa died in 1957 at age 60 having failed to find a publisher for this, his first and only novel, based on the experiences of his great-grandfather, a Sicilian aristocrat going through the Italian unification (Risorgimento) of a century earlier.

I found it really amazing.  A very beautiful and sensual novel, amazing at the sentence level, developing a tension-filled sense of a way of life about to collapse.  Also very ironically funny.  And fascinating as a historical novel and an experiment in evoking a vanished way of life.

This was one of my favorite passages.  The Prince is serving a feast to some of his family and neighbors who are initially concerned that he might begin the meal with soup:

The Prince was too experienced to offer Sicilian guests, in a town of the interior, a dinner beginning with soup, and he infringed the rules of haute cuisine all the more readily as he disliked it himself.  But rumors of the barbaric foreign usage of serving insipid liquid as first course had reached the major citizens of Donnafugata too insistently for them not to quiver with a a slight residue of alarm at the start of a solemn dinner like this.  So when they lackeys in green, gold, and powder entered, each holding a great silver dish containing a towering mound of macaroni, only for the twenty at table avoided showing their pleased surprise: the Prince and Princess from foreknowledge, Angelica from affectation, and Concetta from lack of appetite.  All the others, including Tancredi, showed their relief in various ways, from the fluty and ecstatic grunts of the notary to the sharp squeak of Francesco Paolo.  But a threatening circular stare from the host soon stifled these improper demonstrations.

Good manners apart, though, the appearance of these monumental dishes of macaroni was worthy of the quivers of admiration they evoked.  The burnished gold of the crusts, the fragrance of sugar and cinnamon they exuded, were but preludes to the delights released from the interior when the knife broke the crust; first came a mist laden with aromas, then chicken livers, hard-boiled eggs, sliced ham, chicken, and truffles in masses of piping hot, glistening macaroni, to which the meat juice gave an exquisite hue of suede.

…Tancredi, in an attempt to link gallantry and greed, tried to imagine himself tasting, in the aromatic forkfuls, the kisses of his neighbor Angelica, but he realized at once that the experiment was disgusting and suspended it, with a mental reservation about reviving this fantasy with the pudding.

Brilliant!  Maybe I especially enjoyed this passage in this holiday season of gorging ourselves on feasts — none unfortunately of this kind of macaroni.

The soup vs. macaroni dilemma is a nice minor example of the kind of tension that suffuses the novel more broadly in its superb evocation of a culture in crisis and about to undergo a profound transformation, with much more at stake than the contents of the first course primo.  This is interesting: “After the Lampedusa palace was bombed and pillaged by Allied forces in World War II, Tomasi sank into a lengthy depression, and began to write Il Gattopardo as a way to combat it” (wiki): the novel was a memorial, then, of a way of life and its material embodiment the palace, constructed after its destruction.  This illuminates maybe the novel’s most amazing scene, when Tancredi and Angelica wander through the palace, besotted with mostly-suppressed desire, exploring lost corners and passageways of the palace and uncovering, among other things, a hidden repository of remnants of the “obscure pleasures,” “bizarre extravagances,” “sleeping embryos” of a pre-nineteenth-century erotic life that has been put away into storage: little whips and other accoutrements of an 18th-century predecessor’s secret boudoir. “Tancredi was afraid, also of himself; he realized he had arrived at the secret nucleus, the center from which all the carnal agitation with the palace radiated outward.”  Di Lampedusa wrote this novel after his family’s palace had been bombed and its layers of history, containing these secret histories of desire, had been revealed and destroyed, so the novel becomes an obsessively-detailed memorial to this inheritance.

I have not seen the Visconti adaptation of the novel since high school or something and don’t really remember it.  (I probably saw it at the Brattle Theater.)  But The Leopard is probably a strong contender for the question, which literary masterpiece’s adaptation is itself a stand-alone masterpiece?

By the way, the recent movie I Am Love would be another possible cinematic accompaniment to The Leopard –something to watch after a great Italian meal.