Indianapolis has always seemed like a surprisingly unexciting city for its size (pushing a million), even if I’m glad we live an hour away from the airport and a big-city mall, Trader Joe’s, etc.  (We’re sort of sick of the Children’s Museum, but it is very good.)  But lately the city has seemed to be looking up in various ways… We had a great little jaunt on Friday to our two new favorite places in town:

(1)  Goose the Market.  This place is sooo good.  We are dangerously obsessed with their Batali sandwich (named not for Mario but his father Armandino Batali, if you please), described by Bon Appetit, which named Goose the “top sandwich shop” in the U.S. a couple years ago, as “a standout Italian sandwich with coppa, soppressata, capocollo, provolone cheese, and tomato preserves.”  It’s a butcher/deli bar plus basement wine/beer bar plus small grocery with some nice vegetables, dried grains, and so on.  Really charming.  We did somehow manage to spend $48 on two sandwiches and what I imagined as “a few other things,” but really it’s not at all over-priced. 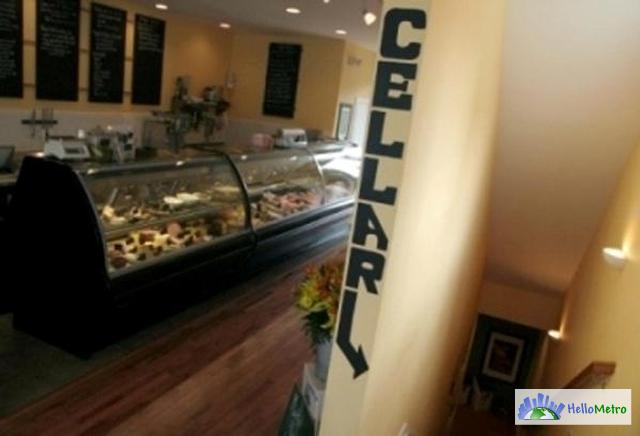 (2) We brought our Batalis and assorted snacks to the Indianapolis Museum of Art’s “100 Acres” Art & Nature park for a picnic.  A New York Times article describes it:

Twenty bone-shaped benches by the Dutch artist and designer Joep van Lieshout sprawl across a meadow, forming a huge human skeleton; the piece, “Funky Bones,” is meant both to evoke the remains and artifacts of the American Indians who once lived in the region and to offer a place to picnic and lounge. A terraced pier overlooking the park’s 35-acre lake and resembling a topographical map was designed by the sculptor Kendall Buster of Richmond, Va., as a perch for fishing or reading, except when the lake floods every year. All eight of the artists’ installations, which dot the park’s unruly woodlands, wetlands, meadows and lake, were conceived to handle wear and tear from people as well as nature.

“We didn’t want it to be a precious thing,” said Lisa Freiman, the museum’s curator of contemporary art and director of the park. “There are no restrictions. Whether you create them or not, people will touch and climb on the sculpture anyway.”

The girls loved the place and tore from installation/sculpture to sculpture.  By chance we visited on the weekend when a very short-term project was in place, sound artist Craig Colorusso’s Sun Boxes:

Marvel at a field of 20 solar-powered speakers, each programmed with a different loop of guitar notes, for an effect of an overlapping field of sound. The sounds of Sun Boxes have been described as both soothing and energizing, as they react to the natural fluctuations of cloudiness and sun to create an ephemeral composition. All are welcome to enter the sound environment at will during the three-day installation.

These were lovely… you could hear at least traces of the sound throughout the park, rising and falling at intervals.  It was overcast (started to rain lightly just when we were leaving) and there were a bunch of people hanging around the boxes who I assume were ready to cover them with tarps (or remove them? probably the former) if needed.

The girls had not been particularly excited about this outing, and once we were there, they kept stressing that it was “so different from what I thought.”  When I pressed them about what they thought it would be, Iris said, “like an art museum, and next to it, just some normal sculptures.”

Our plan was to go afterward to Havana Cafe which we read about in this article about Indianapolis’s ethnic food scene, but we got too tired and went home.