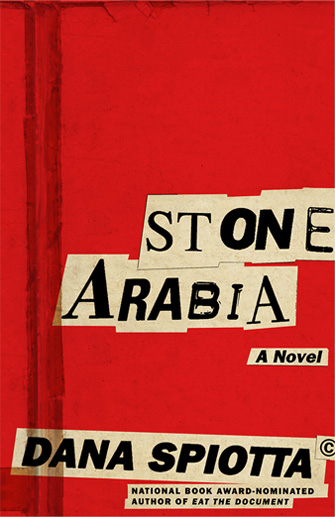 The one other novel I read in the midst of my Classic Doorstops was Dana Spiotta’s new Stone Arabia (link to Amazon where it’s for sale for less than $14).  This was also my first Kindle book purchase of over $1.99 or so.  I have to say that the whole Kindle (on iPad) experience was pretty great.  There I was up in Maine — the libraries did not even have the novel in yet, and in one minute I had it downloaded for $12.99.  Sarah keeps telling people that I “clutched the iPad to my breast like an infant” the entire time in Maine which I think is a gross overstatement, but it’s true that I do love my enchanted/ing tablet.  Reading in bed can be mesmerizing… no book light… the words hang in space, luminous and abstract.  Flip, flip, flip with your finger like Merlin or the Wicked Witch navigating a magic crystal.

I enjoyed this novel but don’t think it’s as strong as her great previous one, Eat the Document, which was based loosely on the life of Cathy Wilkerson, I believe, the former Weather Underground radical who changed her identity and lived ‘underground’ for a decade after playing a role in the accidental explosion of her father’s Manhattan townhouse.  Eat the Document is one of my favorite novels of recent years… Stone Arabia is well worth reading, especially if you’re a pop music fan, but felt to me slightly schematic or high-concept (movie-ready) by comparison.  The narrator is a woman, Nicole, whose older brother Nik almost made it as a rock and roll star, but (kind of along the lines of the Ben Stiller character in Greenberg?) missed out on success due to some combination of intransigence, eccentricity, and refusal to compromise.   Nicole narrates the novel, but big chunks of it constitute Nik’s “self-curation,” in the form of an obsessive project of semi-fantastic memoir, telling in great detail the counterfactual story of his major success and decline as an internationally famous pop star, including elaborately fabulated documents such as record reviews, fan mail, etc.  He also records cd after cd of his increasingly strange music, which he distributes in tiny, fully-packaged editions to a small circle of family members.  [btw, Great Jones Street (1973) by Spiotta’s mentor Don DiLillo, about reclusive, Dylan-esque rock legend Bucky Wunderlick and the theft of his unreleased recordings, hangs over this one.  The title of Spiotta’s last, Eat the Document, is appropriated from a Dylan tour documentary, fwiw.]

In this sense Stone Arabia reminded me a little bit of Jonathan Lethem’s The Fortress of Solitude, with the similar structure of a narrator describing a close family member’s eccentric, non-circulating project of self-memorialization or curation.  Or I suppose it’s a bit different in that in Lethem’s novel the father is simply working on a never-ending private artwork (an avant-garde film)… but there’s a similar feel in the relationship and the way the novel contains and represents a displaced self-memorialization.  Towards the end the self-curation takes a final turn of the screw when Denise’s daughter, Nik’s niece, begins a documentary film about Nik and his projects.  The novel is thinking through very of-the-moment questions about the meanings of our self-documentation, the degree to which celebrity has become normalized as a life path for ordinary people (Youtube stars, etc), and the psychological/social effects of viewing one’s own life as a “project” or a mediated story.  When self-documentation ends, can life or identity continue?  The threat of suicide-via-data-erasure (or cessation) hangs over the narrative (with almost P.K. Dick overtones at times).

Spiotta obviously knows and understands pop music, underground celebrity, the contemporary mythologies of semi-popular culture, from the inside, and so the portrayal of Nik is really compelling.  He’s a fictional cousin to real-life “lost” figures of underground music along the lines of, I don’t know, R. Stevie Moore, Skip Spence, Scott Walker?  Especially since the 1980s, we’ve been drawn to the narrative of unknown post-punk/rock legends who emerge and reveal a fully-realized body of work that was recorded but kept secret or totally ignored. It took a few decades of rock and roll history to allow sufficient sedimentation of the historical record such that giants could be “discovered,” preserved in amber from some previous strata.  Rehabilitation projects, reclaiming the marginalized, almost a World-Music-ization of Western pop, finding the primitive genius out in in the wilds.  With bands like Pavement and Guided by Voices, this became an increasingly conventional means, even, of launching oneself as a band or musician “out of nowhere” — generating the effect of “who are these guys?  Who made these strange artifacts?  Who plucked then from obscurity?”  Nik intentionally withdraws and chooses to perform as a pop music star in a private world of non-circulation, yet with a fully-articulated story of public significance, turning himself into a musical tree falling in the woods.

Stone Arabia has received rapturous reviews — “Evocative, mysterious, incongruously poetic…gritty, intelligent, mordant, and deeply sad,” NYTBR — and I think they’re are at least partly deserved… But in the end I agree more with the review in New York Magazine that praises the novel highly but complains that Denise can feel somewhat “generic…  a packhorse for all the familiar baggage of modern life;” we’re always looking through her to get to her mysterious brother’s more interesting, and only partly accessible, consciousness.

Still, if you like rock and roll/pop music fiction, this is a good one; not as great as A Visit from the Goon Squad, IMO, but in some ways a worthy pair to Egan’s novel from last year.

3 thoughts on “Dana Spiotta’s *Stone Arabia*: a musical tree falling in the woods”