We made a little Spring Break visit to Cincinnati this week, and one highlight was the show of Nick Cave “soundsuits” at the Cincinnati Museum of Art.  This is not the Australian musician Nick Cave of the Bad Seeds but the African-American, Missouri-born artist.  (At first I thought, geez, if you have the same name as an iconic/famous musician, wouldn’t you use Nicholas or something professionally? But it turns out the poor guy is only two years younger than the Australian Nick Cave.)

The soundsuits are body suits made of fur and (sometimes human) hair and decorated with buttons and various other appendages, tassels, sequins, feathers, and patterns.  They’re really beautiful, often funny & joyful, sometimes a bit scary, sometimes in the form of bears or other totemic animals.  In some ways they’re very simple — as much textile art, fashion and costuming as high-concept art; obviously influenced by drag outfits and probably New Orleans Indian Mardi Gras costumes, not to mention actual Native American or other indigenous shaman or ritual clothing.  One room was screening a video of the artist (and others?) dressed in the suits, dancing and generating the sounds and noise that they are designed to make when moving.  But in fact they worked very well as more static sculptural displays. 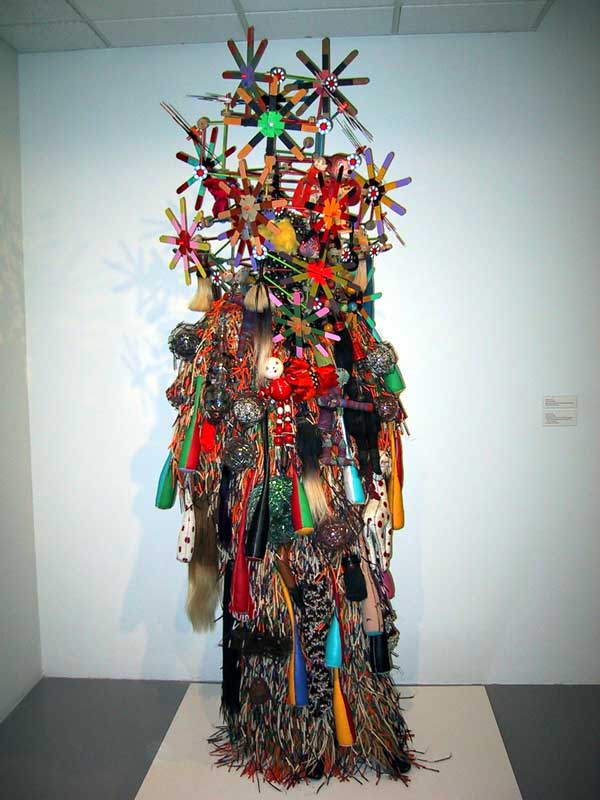 Part of what was neat about seeing them was the clever way they’d been integrated into the museum.  The Cincinnati Art Museum is a big, old-school, traditional 19th-century art museum with a pretty impressive collection of Old Master-type work from the last few centuries.   They scattered the soundsuits throughout the entire collection such that you follow blue arrows on the ground from room to room to come upon them integrated with the permanent collection.  They often seemed to be playing off the Japanese ceramics or 18th-century French painting or whatever it was in that room; although I never felt sure how intentionally or expressly the juxtapositions had been been planned, it often felt as if there were subtle parallels or echoes at play.

The girls really loved them too, and would gasp and exclaim when we came upon a new one.  It was definitely art an 8-year-old girl could relate to, all about the transformative power of costumes and dressing up.

Here’s a video interview of the artist with some of the suits: