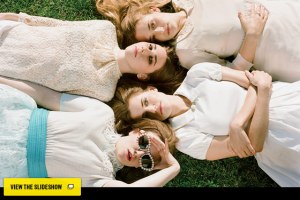 I am actually kind of pissed off at this Jon Caramanica piece that begins, “Those looking for hints of racial tone-deafness on the second episode of “Girls,” last Sunday on HBO, wouldn’t have been let down.”

The evidence for this?  “Jessa (Jemima Kirke), nervously facing down an abortion, insists, ‘I want to have children with many different men, of different races,’ as if they were trinkets to be collected, like key chains or snow globes.”  Yes, this is an instance of a character, a hilariously fatuous 23-year old, revealing (in a moment of heat and personal crisis) “racial tone-deafness” in a conversation with a close friend.   The whole point is that she is fatuous and un-selfaware.

What irritates me is the hypocrisy of the New York Times* criticizing a (IMHO) very smart and funny show for depicting the lives of (so far) four relatively privileged (though not actually remotely near member of the 1%– they all have to work day jobs) white girls living in Brooklyn.  What, this should be like the beer commercial where every white person has one reassuring best friend of color with them at the bar?  Please, just read through an issue of the Sunday Styles section in the NYT and then watch Girls and tell me which one reveals more unselfconscious, unexamined privilege.

*Yes, I do realize that the Styles section is not actually Jon Caraminica’s fault or responsibility.  But that is a weasly formulation: “those looking for hints… won’t be let down.”  Of course, this writer is just using the pseudo-controversy over the show as a hook to write a piece about the politics of representation on t.v.

In an email exchange on this topic, a friend who basically agrees with me observed, “The one thing I would say is that the portrayal of the Asian-American girl in the publishing office as ‘bitch w. computer skills’ did seem slightly jarring in the all-white context.”  That is actually a good point; I’d forgotten about that, but it’s true, that scene (and I can’t think of any others) could possibly be read as a somewhat Curb Your Enthusiasm-like wince-inducing moment.  As my friend also commented, however, this scene takes place in an utterly realist context — the rival editorial assistant with better computer skills (she just learned Photoshop) might very well be Asian-American, there is no reason why she might not be.  The bottom line for me is that unless you are shocked, shocked, that in a group of four recent liberal arts college graduate buddies in Brooklyn, all are white (where’s the black best friend?), it seems absurd to pick on Girls for television’s (very real) larger failings of diversity.  (Of course Caraminica did eventually say more or less this.)

So far I am loving the show.  Part of my thinking here derives from a “don’t look a gift horse in the mouth” principle of popular aesthetic criticism.  A favorite moment, for example: the scene where the Lena Dunham character’s job interview is going great until she, flushed by success and unable to bite her tongue, makes a joke suggesting that her interviewer was a notorious date-rapist in college, and is told (as the interview screeches to an unsuccessful close) that this kind of humor isn’t appropriate in “an office environment.”  Cut to her maneuvering her dejected and wonderfully imperfect (just normal) body down the street…