It is ridiculous, whenever I read anything taking place around this time in NYC I always find myself thinking, “just scrape together some money for the down payment on an apartment and you will be set for life!!!” 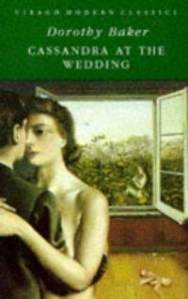 Dorothy Baker, Cassandra at the Wedding — kind of amazing 1962 novel (in the New York Review of Books reissue series) about brilliant identical twin African-American sisters.  Movies like Rachel Getting Married and Margot at the Wedding must be ripping this off (the latter most obviously & explicitly).  Cassandra, working on her literature PhD at Berkeley, depressed and blocked, difficult and with a drinking problem, shows up for twin sister Judith’s wedding, which she proceeds to disrupt because she is frightened of losing the sororal/twin bond.  The novel switches halfway through to Judith’s POV.  A bit of an exhausting high-style stylistic performance, but excellent.

Denise Mina, The End of the Wasp Season — am in the middle of this now — excellent police procedural taking place in contemporary Glasgow.  Protagonist detective is pregnant with twins, dealing with sexism and other stuggles among her colleagues (a tiny bit in the Jane Timoney mode, maybe).

Alison Bechtel, Are You My Mother?  A Comic Drama.  The subtitle is necessary or you will get the children’s picture book in Amazon.  This got a rave review in the Sunday Times Book Review and a bit of a slam from Dwight Garner in the daily.  I’m somewhere in between — I agree with him that its celebrated 2006 predecessor Fun Home (which seems to have become a “canonical” graphic novel almost at the level of Maus or Persopolis) was better because it had much more of a story: this one is ultimately too much of a therapy diary about her relationship with her mother, which turns out to be just not as newsworthy as her narrative about her strange father.  I still liked it, though, and she’s a wonderful artist whose pages are always fun and appealing to read and examine.  It sent me to finally read Alice Miller’s The Drama of the Gifted Child (which she discusses; she then gets to Donald Winnicott via Miller) which I’d been meaning to check out since reading about David Foster Wallace’s obsession with it (his copy of it is extensively annotated with personal reflections, as this piece, well worth reading, explains).

Lloyd Alexander, The Book of Three.  Have been reading this to the kids.  The first in the Prydain series.  I have strong (though vague) memories of reading The Black Cauldron and The High King but I think I never read the others in the series, or at least not this one.  It’s fun although all the Welsh names are challenging to read aloud: Gwydion, Caer Dathyl, Achren, Melyngar, Dyrnwyn, Fflewddur Fflam.  I now realize that J.K. Rowlings’ Dobbie the House Elf ripped off not just Gollum/Sméagol but also Alexander’s Gurgi.