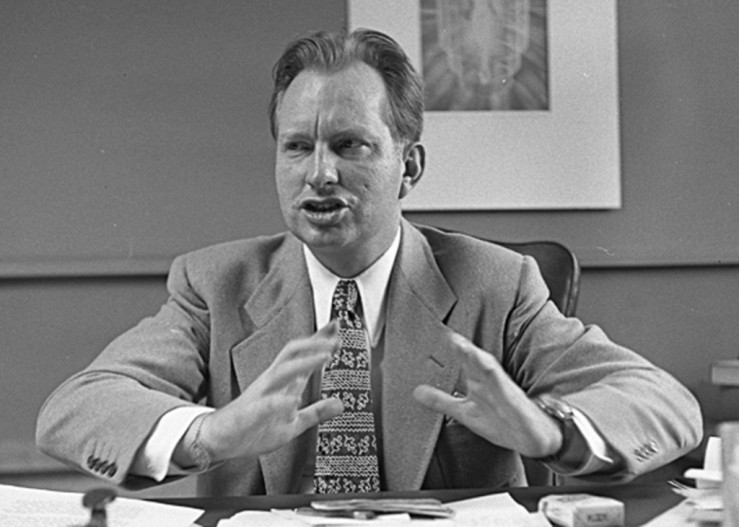 I’m reading Lawrence Wright’s Going Clear: Scientology: Hollywood, & the Prison of Belief, from which I keep having to read excerpts out loud for being so bat-shit crazy even within the frame of my expectations about Scientology and L. Ron Hubbard.

The basic story so far: young man with a flair for self-dramatizing/lying joins the Navy in WW2 and is discharged; at this point a massive gap develops between Hubbard’s own accounts of his experiences in the war (filled with heroism and derring-do) and all extant navy records of his undistinguished or worse record.  He develops a promising career as a science fiction writer and becomes part of a boho sci-fi scene including the likes of Robert Heinlein, who becomes a close buddy.  Joins a cultish commune in Pasadena called the Agape Lodge, “a branch of the Ordo Templi Orientis, a secret fraternal organization dedicated to witchcraft and sexual ‘magick,’ based on the writing of… Aleister Crowley.”  Hubbard’s estranged son later comments that when Crowley died in 1947, “That’s when Dad decided that he would take over the mantle of the Beast and that is the seed and beginning of Dianetics and Scientology… It was his goal to be the most powerful being in the universe.”

Under anasthesia at the dentist, Hubbard has a vision that he believes reveals the secrets of existence to him.  He writes a self-help book based on said vision, Dianetics: the Modern Science of Mental Health, which becomes a surprise best-seller and makes him wealthy.  When the Dianetics trend passes, however, Hubbard is broke again, and subsequently re-invents Dianetics as not simply a kind of self-help, power of positive thinking alternative to mainstream psychiatry, but instead a full-fledged religion with Hubbard at its center as a charismatic leader.  This is when things start getting really weird and dark.

A few favorite passages so far.  This is from “a list of personal goals and compliments [Hubbard] pays himself, but… also a portrait of the superman he wishes to be,” written in the late 1940s before the publication of Dianetics.

You can read music.

You are a magnificent writer who has thrilled millions.

Ability to drop into a trance state at will…

You did a fine job in the Navy.  No one there is now ‘out to get you.’

You do not know anger.  Your patience in infinite.

Snakes are not dangerous to you.  There are no snakes in the bottom of your bed.

Later, in the heady “Sea Org” era, when Scientology’s leaders had not yet found a stable home base and were located on a ship at sea:

Hubbard began recalling many of his own various existences… He claimed to have been a contemporary of Machiavelli’s, and he was still upset that the author of The Prince stole his line ‘The end justifies the means.’ He said he had been a marshal of Joan of Arc and Tamburlaine’s wife.  He told stories of driving a race car in the alien Marcab civilization millions of years before.  He came to believe that in some of his past lives on this planet, he had buried treasure in various locations, so he launched an expedition to unearth his ancient hoards.  He called it the Mission of Time.  He selected a small crew… Because he wanted to keep the mission secret, he had two long rafts fashioned, which could be rowed ashore under cover of darkness and pulled up on the beach near where he imagined his ancient treasure was buried….

The missionaries found some old bricks they thought might have been the ruins of a castle beside the watchtower.  The metal detectors found nothing.  Hubbard decided to come along the next day to inspect the site himself.  “Yes, yes, this is the place!” he said excitedly.  He explained the absence of treasure by saying that it must have been hidden in a portion of the ruined castle that had fallen into the sea.  [The expedition] next stopped in Calabria, on the toe of Italy, where Hubbard had buried gold in his days as a tax collector in the Roman Empire.  None was found, however.

It is an unbelievable story, and I have not even gotten to Tom Cruise and John Travolta yet. The book makes you realize that Paul Thomas Anderson’s The Master massively underplayed the craziness– it represents Scientology as resembling in origins a deranged instantiation of an H.P. Lovecraft fiction or something along those lines.

p.s. The Amazon reviews of the book, some written by former Scientologists, are fascinating.  Also see Kim Masters’ “Why the Media is No Longer Afraid of Scientology.”

1 thought on “You are Radiant like Sunlight: L. Ron Hubbard and Scientology”