It appears that the new Future Bible Heroes single, “Living, Loving, Partygoing,” is a tribute to the English modernist novelist Henry Green. And more specifically, to the Penguin edition that collects all three of those novels.  (Penguin is onto this.)

I’m not all that surprised that Stephin Merritt would be a Henry Green fan.  Perhaps his recent hearing problems/ tinnitus led him to the “odd, haunted, ambiguous” Green, who is famous for his Altman-esque overlapping conversations.  From a Paris Review interview with Terry Southern, “The Art of Fiction” #22, from 1958:

TERRY SOUTHERN: I’d like to ask you some questions now about the work itself. You’ve described your novels as “nonrepresentational.” I wonder if you’d mind defining that term?

GREEN: “Nonrepresentational” was meant to represent a picture which was not a photograph, nor a painting on a photograph, nor, in dialogue, a tape recording. For instance, the very deaf, as I am, hear the most astounding things all round them which have not in fact been said. This enlivens my replies until, through mishearing, a new level of communication is reached. My characters misunderstand each other more than people do in real life, yet they do so less than I. Thus, when writing, I “represent” very closely what I see (and I’m not seeing so well now) and what I hear (which is little) but I say it is “nonrepresentational” because it is not necessarily what others see and hear.

Another good moment from this interview occurs when Southern asks how Green came to the plot/story for Loving:

I got the idea of Loving from a manservant in the Fire Service during the war. He was serving with me in the ranks, and he told me he had once asked the elderly butler who was over him what the old boy most liked in the world. The reply was: “Lying in bed on a summer morning, with the window open, listening to the church bells, eating buttered toast with cunty fingers.” I saw the book in a flash.

I’ve kind of been waiting for the ripples from Downton Abbey-mania to reach Green. Henry Green Revival!

Merritt’s lyrics seem less faithful to than perhaps generally inspired by the mood of Green’s novels, e.g.: “At Mink Stole’s birthday/ in gay Provincetown/ I came to DJ/ and left with the clown.” 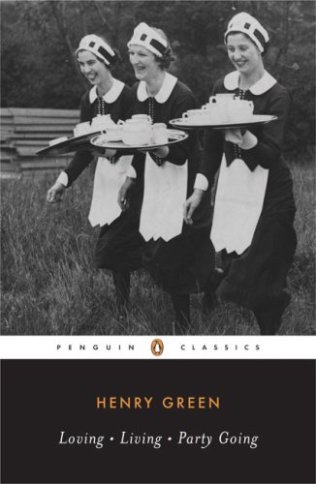 1 thought on “Living, Loving, Partygoing with the Future Bible Heroes and Henry Green”