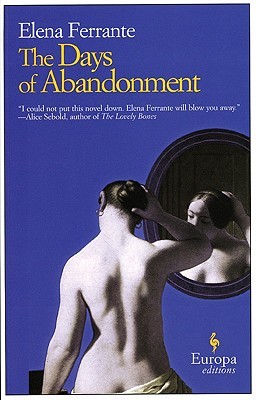 I learned about Italian novelist Elena Ferrante, four of whose books are out in English translation on Europa Editions, from James Wood’s good piece on her work in the January 21, 2013 New Yorker.  That Wood is a fan makes me pretty sure that Ferrante’s work influenced his wife Claire Messud’s new novel The Woman Upstairs; I haven’t read that yet, but I’ve heard several interviews with Messud in which she explains her desire to write a novel in a voice of female rage, of a kind familiar from ranting-narrator books like Notes from Underground, but much less familiar in a woman’s voice.

Maybe or maybe not, but Ferrante’s The Days of Abandonment is definitely a novel of female rage — and of female abjection, humiliation, disgust.  Wood writes that “the literary excitement of The Days of Abandonment lies in the picture it gives of a mind in emergency, at the very limits of coherence and decency, a mind that has become a battlefield between reason and insanity, survival and explosion.” The plot is simple: the narrator Olga, a 38 year-old woman, a mother of two young kids who had published one book in her 20s, but in recent years has more or less abandoned her vocation as a writer (this also reminiscent of the Messud novel’s themes), is suddenly left by her husband Mario with no real explanation.  Mario takes up with the 20 year-old daughter of a former close friend, and Olga is left alone with the kids and an unhappy German Shepherd, struggling to keep the household and her mental state in any kind of working order.

Most of the novel takes place in and around Olga’s increasingly claustrophobic apartment; the novel sometimes reminded of Roman Polanski’s great, disturbing psychological horror movie The Tenant. More to prove that she can than out of any real desire, Olga has a one-night stand with a kind but seedy downstairs classical musician, one of the greatest Really Bad Sex scenes I can recall. It’s very graphic, but what’s shockingly memorable are the embarrassing, intimate details of what goes down between them.  Bodily fluids of various kinds, not just sexual but also vomit and human and dog blood, spill out throughout the book, always emphasizing Olga’s sense of dismay and lack of control over the boundaries between herself and others, and her own inside and outside.

Women don’t often get to rant in novels, Messud has been commenting — and/but The Days of Abandonment is one long, sometimes unhinged, mesmerizing rant.  “Obscenity came to my lips naturally… As soon as I opened my mouth I felt the wish to mock, smear, defile Mario and his slut.”  She’s haunted by a childhood memory, recurring throughout the narrative, of a neighbor her mother had called the “poverella,” that “poor woman,” who was left by her husband and descended into despair, eventually drowning herself.

I haven’t really conveyed the ways the novel is, implausibly, also somewhat hilarious at times. Hard to take at moments — the plot involving the German Shepherd Otto is upsetting, for example — but a great read.  And not as much of a downer in the end as you fear.

I should also mention that Ferrante is an author of Thomas Pynchon-like mystery; her name is a pseudonym, and virtually nothing is known about her personally. Rumors apparently swirl about who she may really be. Must be hard these days to maintain that kind of secrecy.  Here’s a brief interview with her (conducted via email). And her 2008 NYT Op-Ed about the “stinking, polluted filth” of her hometown of Naples.

I want to read her most recent, My Brilliant Friend, apparently the first book in a trilogy.