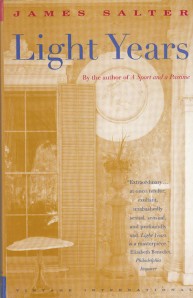 The recent Nick Paumgarten profile of James Salter in The New Yorker made me want to read his 1975 novel Light Years, which I’ve now done.  It’s a really beautiful novel that sometimes reads a bit like To the Lighthouse if it had been written by the Hemingway of A Moveable Feast… with a lot of explicit post-1960s sex. And a touch of, I don’t know, Joan Didion or maybe better Renata Adler. It’s a portrait of a happy marriage and then its dissolution. For the first half of the novel, I once in a while felt just a touch irritated by, or at least slightly resistant to, the novel’s luxuriating in all the sensuous, tactile, lavish detail of the Berlands’ envy-producing life in a farmhouse outside NYC. All the fabulous, drawn-out meals sometimes make you wonder, do these people ever just throw together a sandwich? And a few of the sex scenes made me giggle -e.g. when Nedra is described as moving “like some marvelous beast.” But when the marriage disintegrates and the house is eventually sold, that luxuriating feels, in retrospect, poignant and sad, and idealized in hindsight:

The feast was ended. Like the story he had read to them so many times, of the poor couple who were given three wishes and wasted them, he had not wanted enough. He saw that clearly. When all was said, he had wanted one thing, it was far too small: he had wanted to give them the happiest of homes.

He has a very distinctive, crystalline prose…  Gorgeous sentences, like a prose poem. I can see why (as the profile explains) so many contemporary novelists admire him.

Oh, this is too cool!

As part of James Salter month at the Paris Review, the journal’s blog has posted some of Salter’s notes and scribblings, documenting a little bit of his process coming up with the title for his 1975 novel Light Years: “At every magazine or publishing house, there’s always an editor or two with a knack for titles. But even so, rarely does one come in a flash of divine inspiration. There are iterations and themes and the same words written over and over. Here is a glimpse of what James Salter’s process was like with his 1975 novel Light Years…. Salter seems so close at points, circling back to light and years, sometimes on the same page but not always the same line, ranking his favorites and weighing the opinions of others.”

Tortoise Years would have been kind of hilarious– but fitting (the novel contains a very poignant and symbolically resonant tortoise).