Well, actually just a third of it to date: The Lady Vanishes and The 39 Steps in the Criterion Collection reissues over the last two weekends.

Between 1934 and 1938, Alfred Hitchcock made six films in England that stand collectively as the highlight of his British period. Dubbed Hitch’s “classic thriller sextet” by theorists and critics, The Man Who Knew Too Much (1934), The 39 Steps (’35), Secret Agent (’36), Sabotage (also ’36), Young and Innocent (or The Girl was Young Indeed, 1937), and The Lady Vanishes (1938) all contain thematic and visual elements that he would later implement in his Hollywood films. 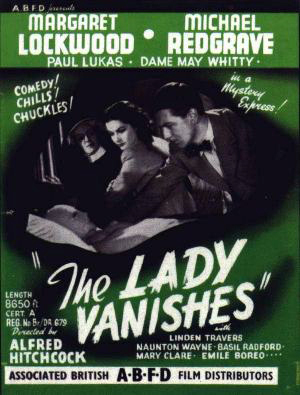 Both are fantastic, but my nod goes to The Lady Vanishes even if the BFI list of the top hundred British films ranks it at #35 as opposed to #4 for The 39 Steps. My memories of it were so vague, and I am wondering how much of this relates to the likelihood that I previously watched a lousy public-domain video version; this is a recent, deluxe, beautiful Criterion two-disk version.  If you have not seen it in years, I highly recommend checking it out.  Comedy, chills, and chuckles are delivered in profusion as per the poster. I did not even have any memory of the not-so-brief beginning part of the movie that takes places off the train, in an inn in the nameless and oddly-imaginary Eastern European (?) country.  My most vivid recollection was the hauntingly uncanny moment when the writing in condensation on the train’s window, “Miss Froy,” re-emerges. The part of the movie where Margaret Lockwood can’t get anyone on the train to admit that her seatmate Miss Froy ever even existed is classic Hitchcock in its frightening atmosphere of sudden, inexplicable conspiracy.

Interestingly, in both movies a crucial plot point depends on the recollection & memorization of a certain tune or snatch of music.  The 39 Steps begins and ends in a music hall, and I think it “re-mediates” music-hall entertainment, in certain respects — i.e. it references and re-frames music-hall as a pre-existing representational code. In The 39 Steps the memorization of the tune is central to the plot and frames the entire story; in The Lady Vanishes it’s also important, albeit (as is typical of the movie) given a light spin: Michael Redgrave is some kind of musical ethnographer who, at the onset, is gathering examples of traditional native dance and music, so he is confident that he can easily memorize the crucial message encoded in the tune.  He actually loses the tune, but it turns out all right even so. 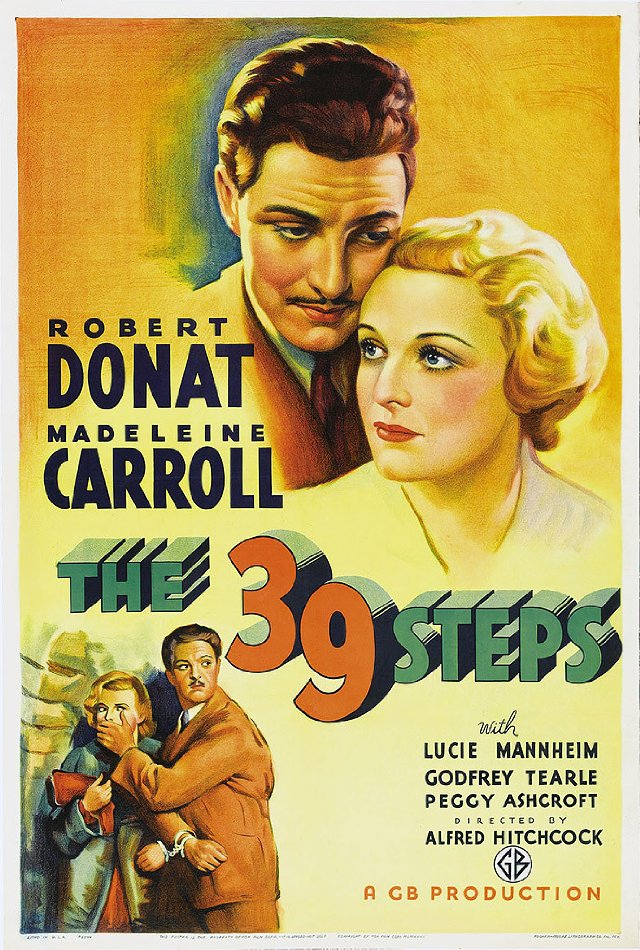 Some of the original taglines from The 39 Steps:

Its gender politics are creepy in not-atypical Hitchcockian style (much more so than The Lady Vanishes), with a plot contrivance handcuffing Robert Donat to Madeleine Carroll and requiring him to knock and drag her around quite a bit. One senses some disgust at the female body and perhaps a suppressed desire to stab it in the back with a kitchen knife. I was glad the kids had gone to bed by the time I watched excerpts from the famous Francois Truffaut interview with Hitchcock in which he drawls about his favored archetypical Blonde: “we want her to be a lady in the drawing-room and a whore in the bedroom.”  Subtle, Hitch!