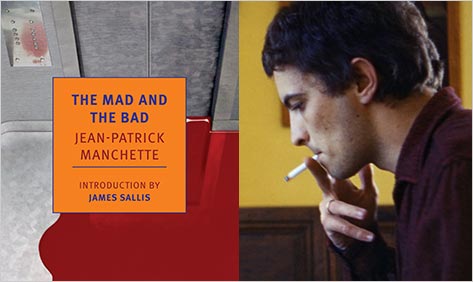 Jean-Patrick Manchette’s bloody 1972 French thriller The Mad and the Bad is a recent release from the great New York Review Books Classics series. It’s quite crazy. I had that experience with it where I read half of it and got distracted for a few days, and then when I picked it up I’d lost track of a few of the plot points, which didn’t really matter much but added to the sense of sheer unmotivated perverse carnage.  In brief, a corrupt architect wants to get rid of his young nephew, who has fallen into his care.  He hires Julie, a young woman who has spent five years in a mental hospital, to take care of the boy, and then hires a brutal hit man with a bad ulcer, Thomson, to kill them both.  (I may have missed something here.)  The attempted execution goes wrong, Julie and the boy escape, and the rest of the book describes their attempt to elude the hit man and his fellow thugs.  The edition’s introduction explains that “for Manchette the world is a giant marketplace in which gangs of thugs — be they leftist, reactionary, terrorist, police, or politicians — compete relentlessly.”  There’s maybe a touch of R.D. Laing-style 1970s anti-psychiatry sentiment in the way the unstable Julie is the book’s only sympathetic character… But she’s pretty crazy, and not that sympathetic.  Society itself is a madhouse, as best exemplified, maybe, by an extended scene that could only be filmed by Quentin Tarentino in which the thugs shoot up an entire busy supermarket trying to kill Julie and Peter:

With stunning speed the store was transformed into a madhouse. More and more people started to run. A wake of detritus marked Julie’s trajectory through the aisles… Above the hullabaloo, by way of background, floated the sweet yet cannonading tones of an old Joan Baez hit, piped through speakers. The place was a bear garden…. Thomson could no longer see either Julie or Peter. He bounded down an aisle, knocking over an old woman who began to wail in terror. He trotted by Boys Apparel, his mouth full of bile…. This is exciting, I am enjoying this, Thomson told himself as he spat gastric juice onto the ground… Mothers were shielding their children by covering them with their bodies. The whole mass was shrieking. Thomson was doubled over with laughter.

I was imagining Mick and Keith reading this during the recording of Exile on Main Street in Keith’s villa outside Nice, although I guess the timing’s not quite right (recording was in 1971).  Still, this has early-1970s-craziness written all over it in a very specific way.