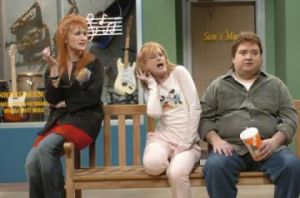 I’ve only seen the first episode of Parks and Recreation so far.  This is the (sort of) spin-off of The Office, a mockumentary starring Amy Poehler as Leslie Knopes, a very enthusiastic parks-and-recreation officer in the fictional Indiana town of Pawnee.  Indiana’s national reputation took a boost when we went blue last November, but this show won’t do a lot to improve the state’s image on the coasts.  One detail I admired in the pilot was the big Bob Knight poster in the office of Knopes’ boss, who does not believe the city government should be involved in creating or maintaining parks, and who thinks the entire town should be privatized and run by Chuck E. Cheese.

Anyway, I found myself watching the SNL Amy Poehler special last night which reminded me that she’s kind of a comic genius.  My all-time favorite Poehler character is Kaitlin, the manic/hyperactive 10 year old girl who drives her sweetly beleaguered step-dad Rick crazy.  She is just brilliant.  Here’s a great one: Kaitlin choosing an instrument to play at the mall music shop with the help of Rick’s friend Chaz, played by Paul Giamatti.  I’m especially partial to Kaitlin’s impromtu performance of the Black Crowes’ “Hard to Handle” (just a few seconds into this clip).  Also check out Giamatti almost losing it as Kaitlin tells him about how she almost died doing a backflip in rollerskates on a trampoline.

Other than the Kaitlin clip, my favorite moments from the highlight show were Poehler with a stalkerish crush on Justin Timberlake, and her heavily-pregnant Sarah Palin rap performance.  I think I somehow never watched that at the time.  It’s kind of amazing that it actually happened in the final weeks of the Presidential campaign.  Surreal to watch Palin bobbing her head to the faux hip-hop.  How desperate must McCain-Palin have been to think that this would be a good idea.