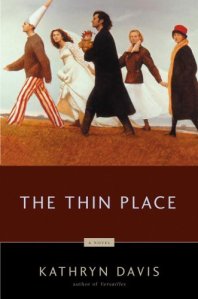 Kathryn Davis’s The Thin Place is a really unusual, enchanting novel. “Everyone prefers to stick with the subject of people” but this novel opens up the characterological range to include several dogs, moose, beavers, a pike, tadpoles, and even lichen. As well as old people, children, and a more usual range of human persons. It has a Virginia Woolf quality in its roving free-indirect-discourse that slips easily in and out of multiple consciousnesses and voices. “So many things are alive: lichen, moss, grass. Also people. So many people are alive and that’s what’s strange, not that things like stones aren’t.” Also, a range of written modes and forms including police logs, newspaper reports, a diary, an astrological report; and working within various time frames and registers including the present day, the late nineteenth century, and the geological or evolutionary time of glaciers and rock. The surprising thing is, though, that the novel does not feel contrived or very “experimental;” it’s involving and funny in its depiction of a New England town during a summer with some odd things happening; you could almost imagine it as an Oprah pick. Maybe it was Davis’s half-hearted attempt at selling out and writing a popular book — if so, I hope it worked.

It’s especially good on “the minds of twelve year-old girls,” filled with “human sacrifices, cockeyed sexual adventures both sadistic and masochistic, also kitties with balls of yarn… and disembowelings.”