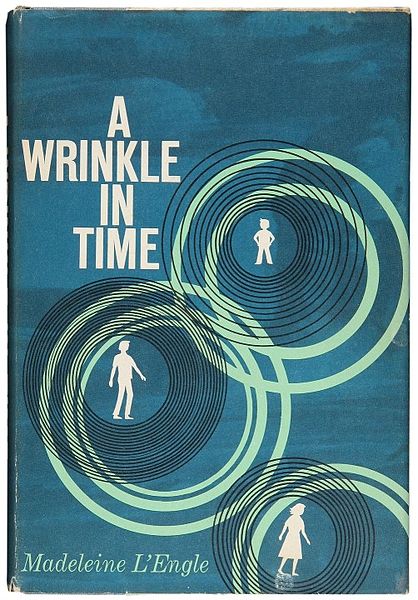 [The cover art of the original Farrar, Straus & Giroux edition]

We recently got through Madeleine L’Engle’s  A Wrinkle in Time, her weird & great 1962 children’s book about 12 year-old Meg Murry, her precocious/genius 5-y.o. brother Charles Murry, and their travel through a time-space continuum to rescue their missing scientist father, who has been taken prisoner by a malign intelligence known only as IT upon the planet Camazotz.  (When I read this, Celie and Iris kept correcting my pronunciation of “Camazotz,” which I assume means they decided they way Sarah said it was correct.)*

[*By the way: we’d gone through a period of several months of not doing much reading out loud.  C&I are always in the middle of a book and so they often seemed happiest just to go to bed and do their own reading.  But I’ve been making an effort to bring back the family reading-out-loud as part of the mix.]

It turned out that I did not remember this novel very well.  I remembered Meg and her little brother Charles Murry, and I kind of remembered the three strange benevolent female Abbott and Costello-named seer/witch/ angel/beings who visit to help them — Mrs. Whatsit, Mrs. Which, and Mrs. Who — but not much beyond that.

I was struck by how much of a Cold War novel this is.  Camozotz is Stalinist or Stasi, beyond the Iron Curtain, overseen by the “CENTRAL Central Intelligence Agency” and its literally all-knowing central intelligence, IT.  A friend commented to me that one of her strongest memories from the novel is of the town in Camazotz in which in front of every front door stands a boy bouncing a rubber ball at exactly the same time & in the same rhythm:

In front of all the houses children were playing.  Some were skipping rope, some were bouncing balls.  Meg felt vaguely that something was wrong with their play….

They see a boy who is bouncing a ball irregularly, out of rhythm — his terrified mother runs out and pulls him inside.  Everyone lives in terror of the oversight of CENTRAL Central Intelligence and IT, which goes beyond Stasi methods in being able to read the thoughts and consciousness of all citizens of Camazotz, who possess “no lives of [their] own, with everything all planned and done” for them.  Meg’s brainwashed brother explains to her: “Why do you think we have these wars at home?  Why do you think people get confused and unhappy?  Because they all live their own, separate, individual lives.  I’ve been trying to explain to you in the simplest possibly way that on Camazotz individuals have been done away with… that’s why everybody’s so happy and efficient.”

In Meg’s final showdown with IT over the mind of her mentally enslaved brother, who now mouths Camozotzian platitudes, she engages in an ideological showdown with this cruel “living brain” on a dais, “a brain that pulsed and quivered, that seized and commanded.”  At one point the nationalistic Cold War allegory seems especially clear when Meg, as a method to resist IT’s mind-control, recites from the Declaration of Independence: “We hold these truths to self-evident!  That all men are created equal,” etc.  But in the end L’Engle emphasizes American virtues or principles less than Christian ones (L’Engle was a serious Episcopalian), as the power of love (more than freedom, say) is what allows Meg to defeat IT and wrest her brother away from ITS power.

The novel is strongly feminist in a way that I think made an impression of me as a kid.  Meg’s mother is as talented and dedicated a scientist as the missing father, and the kids often have to get their own snacks together in the afternoon because the mother is in the middle of an experiment in her home laboratory.  And when Meg finally reaches her father and frees him, she is cruelly disappointed that he can’t make everything OK.  One of the takeaways of the novel’s conclusion is that Meg must learn to solve her own problems; as she says to her father, “I wanted you to do it all for me…. I was scared, and didn’t want to have to do anything myself.” When they land back home on earth he’s lost his glasses and is kind of stumbling around, far from the heroic father Meg had fantasized.

Now onto A Wind at the Door…