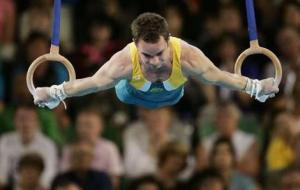 So far Celie and Iris seem to consider the kayaking to have been the high point of the Olympics. I think they only watched it for a few minutes at some point when we were out of the room. Ever since then they bring it up occasionally, always saying, “Daddy, if the kayaking is on, TRUST ME, watch it! They go SO fast,” and variants of that sentiment, always including the phrase, “trust me,” which I don’t recall ever hearing from them before. They also liked the BMX biking and kept asking me if the bikers who fell over had died. And the gymnastics, of course. Their main insight while watching the men’s rings was that it would be really easy to tickle them under their arms while they did that.

After 15 minutes or so of watching they generally start their own Olympicking, as they call it, doing various stunts on the mattress, generally with some loose connection to whatever sport we’ve been watching. The problem is that we’re expected to offer amazed, appreciative Bob Costas-like color commentary on every move or tumble. The other night they were doing some kind of jogging race around the mattress with their dresses pulled up on top of their heads and I had to issue a series of penalties and points-off for bottom-revealing (which is strictly prohibited in international play).