Sorry I missed this one.

Kirkwood Avenue and Walnut Street are hubs of nightlife entertainment for college students, but this Thursday the streets entertained a different crowd: the undead.

About 100 people dressed up as zombies took over the streets for about an hour, walking straight-legged and blank-eyed, bringing traffic to a halt, jumping on cars that honked at them and slapping up against windows of businesses…..

The parade came to a somewhat abrupt end, though, as police cars pulled up behind the crowd with their lights flashing.

Although at first this did not deter the crowd and many zombies surrounded the police car, yelling, the party dissipated as even more squad cars arrived and one man was handcuffed and put inside one of the cars.

Parade participants were divided about the arrest.

Senior Luke Bapple, who believed the arrest happened because the arrestee had touched one of the police cars, said the arrested “zombie” should have known better.

“He was a martyr zombie,” she said. 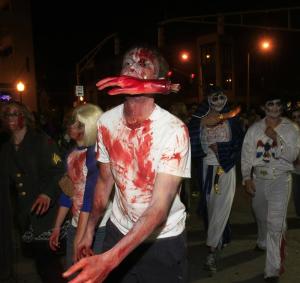