Creative destruction = Joseph Schumpeter’s account of capitalism’s dynamism based on innovation and the destruction and abandonment of the old.

I’m just the 10,001st person to complain about it in print, but Harvard Square has become an outdoor mall.  What’s distressing is not just the loss of all the old book stores, record stores, cafes and diners, but that they’ve mostly become outposts of multinationals — showcase locations for Adidas, Verizon, Bank of America, etc etc. 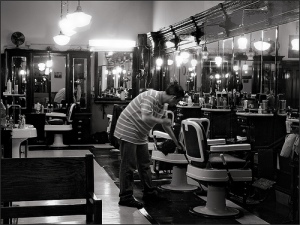 I got my hair cut at La Flamme barbershop which is where it’s always been on Dunster Street.  I sometimes got haircuts here as a teenager.  Amusingly, I have a vague recollection that it was slightly pricey, and so I tended to prefer Central Barber on Mass. Ave. (where the Lemonheads got their trademark buzz cuts), but their current price is $14, so how much could it really have been in 1985?  I did not remember that it opened in this spot in 1898.  It’s very old-school with neat moldings, fixtures, and old-fashioned sinks.  I felt a little Rip Van Winklish, melancholy about all the transformation and loss of what used to make Harvard Square a distinct place rather than an abstract space for late capitalist consumption.  (Specifically, I was upset about the disappearance of the Harvard University Press display store, where I used to get Harvard UP paperbacks for $1, $5 or $10.  You could always find certain books on the dollar shelf: Harriet Jacobs’ Incidents in the Life of a Slave Girl, for example.)

What other Harvard Square institutions survive?  I just checked online and apparently Cafe Pamplona is still there, staffed (according to a Citysearch review) by “‘lanky, slightly despairing graduate students.”  (Sounds about right.)  Whew.  Any votes for most egregious transformation at a single address?

When and if the Harvard Book Store goes, I wash my hands of the place entirely.