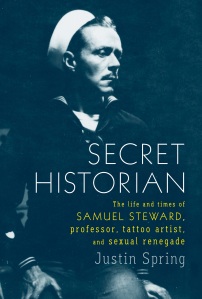 I had the pleasure yesterday of participating in a small seminar-style conversation/presentation at the Kinsey Institute by Justin Spring about his new book SECRET HISTORIAN: The Life and Times of Samuel Steward, Professor, Tattoo Artist, and Sexual Renegade (named a National Book Award finalist last week).  The presentation, basically a powerpoint slide show narrated by Spring, was completely fascinating.

As the NYT review explains,

Somewhere in the United States, there may be an attic containing the written remnants of a previously unchronicled 20th-century life that was even more astonishing than the one the writer Justin Spring discovered in San Francisco a few years ago. But even the most skeptical reader of his new book, “Secret Historian,” will have to admit that the bar is now set high. Samuel Steward, the subject of this absorbing act of biographical excavation, had many identities, including several that the subtitle of the book omits: pioneering sex researcher, collector of celebrity conquests, drug addict, masochist, Catholic (briefly), Navy enlistee (even more briefly), conquistador of vast provinces of America’s pre-Stonewall homosexual subculture. Most fortuitously, he was apparently a graphomaniac who documented his long, dark, exuberant, sad, dangerous life in journals, an unpublished memoir, reams of letters, poems, erotica, semifictionalized short stories and even a 746-entry card catalog of his sexual history, scrupulously maintained over five decades and in some cases ornamented — perhaps for future biographers? — with what Spring decorously calls “DNA-verifiable” evidence of his liaisons.

I’d just been talking about Roland Barthes’ “The Death of the Author” and Michel Foucault’s “What is an Author?” with students and so was thinking about Steward through that lens.  The book seems especially fascinating as a reflection on the category of the “biographical subject.”  Steward has so many identities and aliases, most of them involving one form or another of writing, recording, archiving.  He was a literary novelist, and later an author of gay erotica and porn under the name Phil Andros.  He was a well-liked English professor who became close friend and correspondent with Gertrude Stein and other literary luminaries.  He was a tattoo artist — Phil Sparrow — who for a time was the Hells’ Angels’ primary tattooist in the Bay Area.  And he was a self-archivist-qua-sex researcher whose “Stud File” held scrupulous notes on all 750-odd of his sexual partners.

So, what’s the “work”?  Seward is a poignant, even tragic figure towards the end of his life: an alcoholic hoarder living in squalor, he felt his writing had never been fully appreciated.  But now, of course, those aspects of his life that in another era would have seemed most disreputable, bizarre, or even unmentionable — i.e. the keeping of the Stud File, which sometimes included pubic hair and other physical specimens — can now be seen as part of a brave determination to create a detailed history of mid-20th-century gay life.  Thus “secret historian” as the primary titular identity.

Spring commented that Steward’s various aliases means that he (Spring) is pretty sure there are still a lot of caches of undiscovered material out there, in the Kinsey or elsewhere, under one name or another.

It was fun to learn about this in the Kinsey seminar room, as the Kinsey itself plays a big role in Steward’s life; he became a source for Alfred Kinsey, who encouraged Steward in his self-documentation.  Spring had some tricky negotiations with the Kinsey about privacy issues, as there are a lot of 80-year old former sailors out there who figure in Steward’s stud file, journals, and photographs.  And of course the Kinsey’s ability to collect archives depends, I presume, on being irreproachable as a repository of secrets.  The presentation was making me think about the status and operation of these personal sexual “archives” and the rules and procedures involved in their creation, documentation, and scholarly availability.  I’d guess that all of these procedures are in flux these days as attitudes shift, and perhaps also as an institution like the Kinsey has greater competition among archives interested in such material.

I would have liked to have seen more of Steward’s actual tattoo art, which was a perfect fit for him in the way tattooing allowed him at once to write, create images, and enter into physical relationships with a stream of young men.  (Although he says he only slept with one Hell’s Angel customer and “did not care to repeat it”).