Family Movie Night this Saturday: Meet Me in St Louis.

I looove Meet Me in St Louis.  To me it has the perfection of ideology.  Is it an “example” of “the movie musical”?  I can’t really accept that.  It defines its own form, genre, ideals. 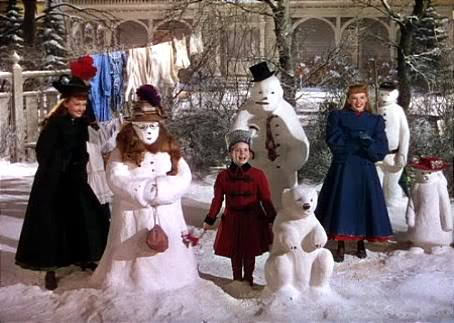 On this viewing I was fascinated by the free-range children.  On Holloween all the 5-9 year-olds go out on the street and build a huge bonfire into which they throw old furniture.  All of this absolutely unsupervised.   Then they put up the 5-year-old, Tootie, to go trick or treating at the house of the meanest old man around, whom they suspect of poisoning cats.  But what this means, in St. Louis in 1903, is not going to the door in your fairy costume, with your mommy hanging back decorously, so you can get a lollipop.  No, it means marching up there alone, ringing the bell, and when the mean man answers, throwing flour in his face from your paper bag and screaming “I hate you!!!”  Then running back in triumph to the giant bonfire, to be celebrated as the bravest of them all by your peers.

And this is what happens in the fancy neighborhood.  I hate to imagine what they did on the wrong side of the tracks.

I was generally fascinated by Margaret O’Brien as Tootie on this viewing.  She seems to have been the prototypical Child Star.  Played Adele in the 1944 Jane Eyre, starred in The Secret Garden, but never made it as an adult actress.

She’s incredible: almost feral.  Her dolls always come down with fatal diseases, so she’s buried scores in the back yard.  For me the greatest scene is when, having stayed up late on Christmas Eve, their last Christmas before the big move to New York, Tootie loses it and goes out in the moonlight and starts chopping off the heads of the snowmen she’s made because she would rather kill them than leave them for the strangers who will be moving into their home.  You also sense it’s a kind of rage against growing up, against the future of becoming a young lady like her sisters and organizing her life around boys and dances and visiting.  She just lets loose, with her uncontrolled, shattering 5-year-old-girl rage, against this parallel ice family, leaving the bodies destroyed on the ground.  And of course she gets her way: dad can’t take it, the move’s off, Eden is restored.

I forgot to mention when Tootie and her slightly older sister, just for kicks, put a straw body on the trolley tracks in hopes of driving it off the rails.  Tootie is almost hit by the trolley and is a bloody mess, and as a cover story, she claims the teenage neighbor boy beat her up.  Her big sister Judy Garland goes over and beats him up.  Then they realize it was all a big misunderstanding born out of Tootie’s pathological hooliganism and lying.  The doctor gives Tootie stitches on her lip, and when dad comes home and he wonders what’s going on, mom tells him not to worry about it.  He just accepts this, no further questions.

Wow.  Don’t you ever feel that things have become kind of buttoned-up?

(The girls seemed to love it, if you were wondering.)

5 thoughts on “Family Movie Night: “Meet Me in St Louis””