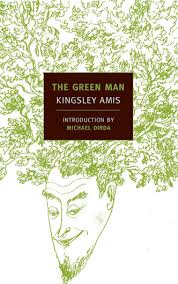 The great New York Review of Books Classics series has a new edition out of Kingsley Amis’s 1969 The Green Man.

It is a strange book.  Imagine a cross between Fawlty Towers, a nudge-nudge swinging circa 1970 English sex farce, and James’ The Turn of the Screw interlaced with a matrix of references to English folklore and anthropology.  One in which the narrator’s quest to get to the bottom of the haunting of his hotel by a malignant 17th-century ghost is presented as not-necessarily more urgent than his well-thought-through (if ultimately not fully successful) plan to convince his wife and mistress to participate in a threesome with him. The novel’s narrator Maurice Allington is the Basil Fawlty figure, a witty alcoholic who runs a B&B-style hotel in the English countryside.  Kingsley cleverly updates James’ novella (among other classic ghost stories) by rendering his narrator’s heavy drinking and tendency to black out and, perhaps, experience hallucinations as a source of ambiguity about the strange phenomena he starts to see around his hotel: strange men and women coming up the stairs and appearing in the window, and a very creepy Wicker Man-esque primaeval forest creature comprised of branches and plants.  Or rather, we ourselves don’t really doubt that something supernatural is occurring, but Allingham’s reputation among his family and friends is such that no one takes him too seriously when he seems to be seeing things.

If you’ve read Lucky Jim you know that Amis can be hilarious; Allington is an extremely mordant, amusingly cranky and misanthropic narrator.  Here’s a favorite passage:

I missed out the artichoke, a dish I have always tended to despise on biological grounds. I used to say that a man with a weight problem should eat nothing else, since after each meal he would be left with fewer calories in him than he had burnt up in the toil of disentangling from the bloody things what shreds of nourishment they contained.  I would speculate that a really small man, one compelled by his size to eat with a frequency distantly comparable to that of the shrew or the mole, would soon die of starvation and/or exhaustion if locked up in a warehouse full of artichokes, and sooner still if compelled besides to go through the rigmarole of dunking each leaf in vinaigrette.  But I did not go into any of this now, partly because Joyce, who liked every edible thing and artichokes particularly, always came back with the accusation that I hated food.

This is true enough.  For me, food only interrupts everything while people eat it and sit around waiting for more of it to be served, but also casts a spell of vacancy before and after.  No other sensual activity must take place at a set time to be enjoyed by anybody at all, or comes up so inexorably and so often.  Some of the stuff I can stand.  Fruit slides down, bread soon goes to nothing, and all pungent swallowables have a value of their own that transcends mere food.  As for the rest of it, chewing away at the vile texture of meat, pulling bones out out of tasteless mouthfuls of fish or emcompassing the sheer nullity of vegetables is not my idea of a treat. At least sex does not demand a simultaneoius outflow of talk, and drink needs no mastication.

A truly committed alcoholic’s theory of food and eating.

What seems unique about The Green Man is the intertwining of its humor and supernatural horror.  It actually is kind of scary which seems a tough trick to pull off in the midst of all the dirty-old-man-innkeeper humor. Kingsley also offers some surprising and cool metaphysical developments late in the novel that you don’t see coming.

Keeping it classy!  Relieved we can’t see the guy’s body. That is definitely something I’d be embarrassed to be seen reading on a bus.

And another, a cool one:

3 thoughts on “Amis’s The Green Man: Fawlty Towers meets The Turn of the Screw”