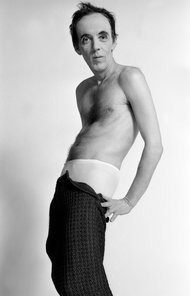 In September 1963, Mr. Mead accompanied Warhol on a cross-country trip to Los Angeles. The entourage filmed scenes for what would become, in 1964, Mr. Mead’s first film for Warhol, “Tarzan and Jane Regained … Sort Of.”

Mr. Mead played Tarzan, edited the film and handled the sound. On screen, his sarong kept falling off while climbing trees, prompting a critic to say that he really did not want to see any more two-hour films of Mr. Mead’s derrière.

Warhol wrote a letter to The Village Voice saying that after searching “the vast Warhol archives,” he could find no two-hour film of Mr. Mead’s behind. “We are rectifying this undersight,” he said, and soon made what would become a little-seen cult classic, the title describing in three words precisely what the critic did not want to see (though the coarser Anglo-Saxon term was used instead of the French).

I kind of like the way the NYT has maintained a regime of prudery and delicacy that requires this kind of work-around.  The Times music listings for the band [Pissed Jeans] they call “****** Jeans” are always amusing: “His band, from Philadelphia, has a name that lies just on the other side of what’s printable here; it describes a basic bladder-related humiliation, something that happens to the drunk or scared or infantile.”  OK, that’s actually just kind of silly.

Check out the piece on the man J. Hoberman called “the first underground movie star.” Also, here is the IMDb listing for Warhol’s 1965 film, and its more-detailed Wikipedia entry.