Wow.  Just soaking it all in now.  What a great day.  And an especially nice fillip of frosting on the cake that Indiana went blue!

I’ve seen saying/thinking that some crazy stuff is going to be coming to light about the McCain campaign and Palin in particular.  Here are some choice bits from Newsweek:

NEWSWEEK has also learned that Palin’s shopping spree at high-end department stores was more extensive than previously reported. While publicly supporting Palin, McCain’s top advisers privately fumed at what they regarded as her outrageous profligacy. One senior aide said that Nicolle Wallace had told Palin to buy three suits for the convention and hire a stylist. But instead, the vice presidential nominee began buying for herself and her family—clothes and accessories from top stores such as Saks Fifth Avenue and Neiman Marcus. According to two knowledgeable sources, a vast majority of the clothes were bought by a wealthy donor, who was shocked when he got the bill. Palin also used low-level staffers to buy some of the clothes on their credit cards. The McCain campaign found out last week when the aides sought reimbursement. One aide estimated that she spent “tens of thousands” more than the reported $150,000, and that $20,000 to $40,000 went to buy clothes for her husband. Some articles of clothing have apparently been lost. An angry aide characterized the shopping spree as “Wasilla hillbillies looting Neiman Marcus from coast to coast,” and said the truth will eventually come out when the Republican Party audits its books. 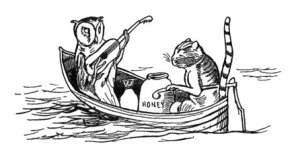 I recommend this article by Jane Mayer in the current New Yorker on how Palin was chosen to be VP.  It reveals that she was chosen more or less because a small boatful (literally) of conservative Beltway policy-wonk nerds thought, on the basis of one lunch, that she was charismatic and hot.  It all reminds me of that Edward Lear poem: the Owls and the Pussycat, at sea with a honey and plenty of money, of course.  In this Lear drawing, imagine William Kristol as the owl.

Shortly after taking office, Palin received two memos from Paulette Simpson, the Alaska Federation of Republican Women leader, noting that two prominent conservative magazines—The Weekly Standard, owned by Rupert Murdoch’s News Corporation, and National Review, founded by William F. Buckley, Jr.—were planning luxury cruises to Alaska in the summer of 2007, which would make stops in Juneau. Writers and editors from these publications had been enlisted to deliver lectures to politically minded vacationers. “The Governor was more than happy to meet these guys,” Joe Balash, a special staff assistant to Palin, recalled.

On June 18, 2007, the first group disembarked in Juneau from the Holland America Line’s M.S. Oosterdam, and went to the governor’s mansion, a white wooden Colonial house with six two-story columns, for lunch. The contingent featured three of The Weekly Standard ’s top writers: William Kristol, the magazine’s Washington-based editor, who is also an Op-Ed columnist for the Times and a regular commentator on “Fox News Sunday”; Fred Barnes, the magazine’s executive editor and the co-host of “The Beltway Boys,” a political talk show on Fox News; and Michael Gerson, the former chief speechwriter for President Bush and a Washington Post columnist.

…Fred Barnes recalled being “struck by how smart Palin was, and how unusually confident. Maybe because she had been a beauty queen, and a star athlete, and succeeded at almost everything she had done.” It didn’t escape his notice, too, that she was “exceptionally pretty.”… Barnes was dazzled by Palin’s handling of the hundred or so mineworkers who gathered to meet the group. “She clearly was not intimidated by crowds—or men!” he said. “She’s got real star quality.”  By the time the Weekly Standard pundits returned to the cruise ship, Paulette Simpson said, “they were very enamored of her.” In July, 2007, Barnes wrote the first major national article spotlighting Palin, titled “The Most Popular Governor,” for The Weekly Standard. Simpson said, “That first article was the result of having lunch.”

…The other journalists who met Palin offered similarly effusive praise: Michael Gerson called her “a mix between Annie Oakley and Joan of Arc.” The most ardent promoter, however, was Kristol, and his enthusiasm became the talk of Alaska’s political circles…. The next day, however, Kristol was still talking about Palin on Fox. “She could be both an effective Vice-Presidential candidate and an effective President,” he said. “She’s young, energetic.” … On July 22nd, again on Fox, Kristol referred to Palin as “my heartthrob.” He declared, “I don’t know if I can make it through the next three months without her on the ticket.”

Soon after, a second boat of wonks showed up in Juneau for a taste of Alaskan hospitality.

On August 1, 2007, a few weeks after the Weekly Standard cruise departed from Juneau, Palin hosted a second boatload of pundits, this time from a cruise featuring associates of National Review….Hanson, the historian, recalled Palin in high heels, “walking around this big Victorian house with rough Alaska floors, saying, ‘Hi, I’m Sarah.’ ” She was “striking,” he said. “She has that aura that Clinton, Reagan, and Jack Kennedy had—magnetism that comes through much more strongly when you’re in the same room.”… Jay Nordlinger, a senior editor at National Review, had a more elemental response. In an online column, he described Palin as “a former beauty-pageant contestant, and a real honey, too. Am I allowed to say that? Probably not, but too bad.”

It’s just kind of amazing how evident these nerds’ sexual attraction to Palin is — it’s more text than subtext.  So bizarre and shocking how little was known about her beyond her “charisma” and impeccable conservative ideology.

My view is that after the McCain peeps had made that crazy decision and realized after the fact what they had on their hands, they put their best face on it. They knew that the normal rules for a veep – a press conference, full media accessibility, airing of all the biographical details – would have required the candidate to quit before November. So they tried to shield her from actual democracy – a dangerous decision for the rest of us, but a rational, cynical decision for a campaign running a delusional liar as the potential next president of the US. Palin of course, lives in her own little, somewhat nutty, world and now believes her manifest destiny has been thwarted.

It’s a massive, unmissable clusterfuck and has been for two months. They just can’t hide it any longer. And the pick is a devastating one – because it basically destroys John McCain’s credibility as a presidential decision-maker. His first major decision as a future president is one of the worst in American political history. That alone should be enough to seal his fate next Tuesday. You need nothing else.

7. “Maybe we’ll get lucky and there won’t be any questions about Iraq, taxes or healthcare.”

5. “Can I just use that lipstick-pit bull thing again?”

3. “Can we get Congress to bail us out of this debate?”

2. “John Edwards wants to know if you’d like some private tutoring in his van.”

COURIC: Have you ever been involved with any negotiations for example, with the Russians?

PALIN: We have trade missions back and forth. We do — it’s very important when you consider even national security issues with Russia — as Putin rears his head and comes into the airspace of the United States of America, where do they go?

It’s Alaska, It’s right over the border. It is from Alaska, that we send those out to make sure an eye is being kept on this very powerful nation, Russia, because they are right there, they are right next to our state.

Someone on The Daily Dish compared this to a memory of a fifth grade book report that she tried to fake her way through.  I had similar thoughts — it reminded me of one of those really, really bad teaching days when you have a cold or something and are either underprepared or just lose your way and you realize you are mouthing absolute B.S.  That bizarre image of Putin “rearing his head” sums it up — this errant figure of speech, kind of a cliche that maybe she started to think better of midway through.

On a second viewing of the video, it almost seems plausible that Palin truly does not understand what Couric means by “foreign policy credentials.”

This (which I found on Americablog.com) is perfect, injecting into the already-inexplicable oddness of the lolcats meme all the madness of this moose-dressing, polar-bear-deregulating, press-conference-fleeing VP candidate. 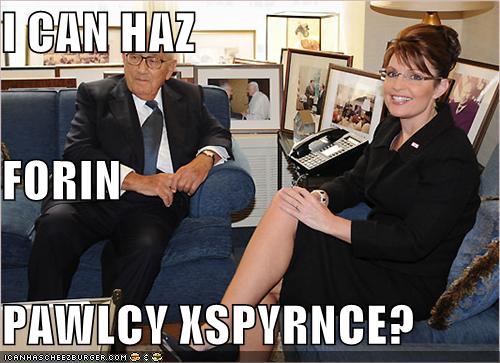 There’s something about lolcats that weirds me out. Is it just idiotic, or is there something clever there? Is it simply the apotheosis of internet stupidity, or an apotheosis that brilliantly lays bare the underlying conditions? Whatever, whenever I think of the walrus bucket meme I chuckle involuntarily, not sure why I am laughing and disconcerted by that uncertainty.

Btw, Chris Rock was really hilarious in his extended comparison of Palin to Michael Vick (vis a vis animal cruelty). 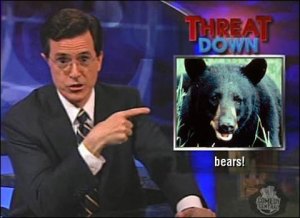 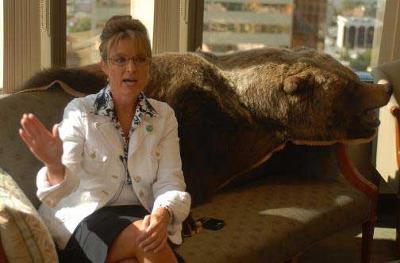 The Republicans are now officially the Stephen Colbert party as they rally around a tough anti-bear platform.

“We’re not going to spend $3 million of your tax dollars to study the DNA of bears in Montana,” McCain continued. “I don’t know if that was a paternity issue or a criminal issue, but …”

As Gail Collins points out,

This is an old line… But even if it was the biggest waste of $3 million in history — even if it was money to sedate grizzlies so hairdressers could apply attractive red tints to their fur — do we want a candidate for president of the United States obsessing about it?

It’s now evident that McCain chose Palin as his Soul Mate in part due to her equally fierce anti-bear policies.  As Palin wrote in a January 2008 Op-Ed in the NY Times (weird! didn’t remember that one),

This month, the secretary of the interior is expected to rule on whether polar bears should be listed under the Endangered Species Act. I strongly believe that adding them to the list is the wrong move at this time…..The Center for Biological Diversity, an environmental group, has argued that global warming and the reduction of polar ice severely threatens the bears’ habitat and their existence. In fact, there is insufficient evidence that polar bears are in danger of becoming extinct within the foreseeable future.

Palin’s position reminds me of the administration torture policy, where failure to become fully extinct in the foreseeable future is analogous to failure to die, and anything below that standard falls short of torture or environmental crisis.  Anyway, presumably these positions were inspired by Stephen Colbert’s well-known “arctophobia, the fear of bears,” which he describes as “giant, marauding, godless killing machines.”

Maybe this all has some encoded relationship to the Russia-Georgia conflict and a symbolic revival of Cold War politics?